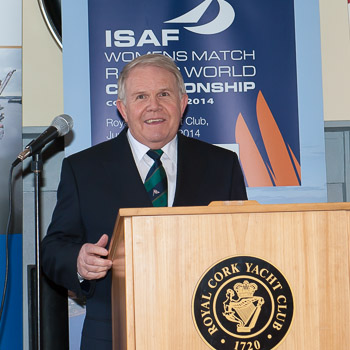 The newly elected ISA President, David Lovegrove, received a warm welcome when he attended the recent launch of the ISAF Women’s Matching Racing and he lost no time in reminding us that he sailed in a Fireball in Dinghy Week in Cork many moons ago.  We all wish him well in the onerous task he has embarked upon in taking up the position of President of our National Authority for sailing at this turbulent time.

The Strategic Review Group (SRG), comprising Brian Craig (Chairman), Bryan Armstrong, Roger Bannon, Des McWilliam, Neil Murphy and Jack Roy was established by the ISA Board in November 2013 to carry out a fundamental review of sailing in Ireland and of the Irish Sailing Association. During the past four months they have consulted widely with clubs, members, ISA staff, training centres, government bodies and other relevant sources. Their report was presented to the ISA newly elected Board on March 20th and the President has not lost any time in ensuring the members receive it as quickly as possible.

The Board considered the report, unanimously accepted its findings and complimented the SRG on the thoroughness of its work. The report identified a number of key areas where attention is required to address short-comings. In addressing the way forward, the Board has embarked on a path to bring about fundamental change to sailing in Ireland. In order to ensure that these areas receive the attention that they require, each Board member has been allocated responsibility for an area and will be the chair of a group that will develop policy for that area.

Your scribe would encourage you to read the full report  HERE