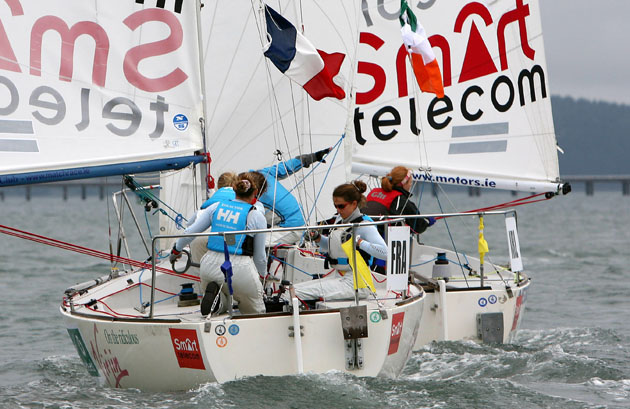 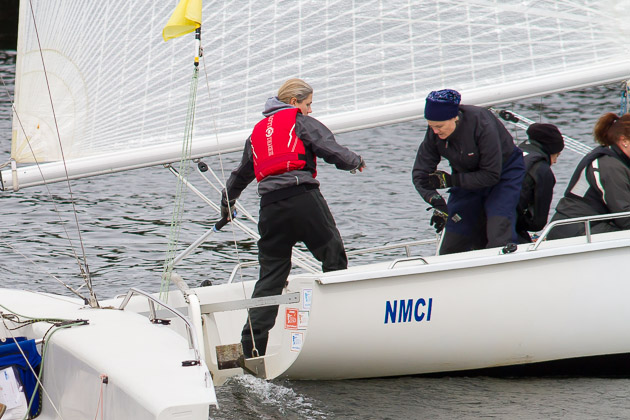 Laura Dillon was the first and only female winner of the ISA Senior Helmsman’s Championship, taking the title in 1996, and also Bronze Medalist at the 1996 ISAF Youth Worlds. She is currently Irish Women’s Match Racing Champion from the event sailed in 2010.  Mary O’Loughlin was the 1997 Mirror Ladies World Champion and represented Ireland in the Women’s Division of the ISAF Nations Cup hosted by the Royal Cork Yacht Club in 2006. Both Irish Skippers are familar with the sailing waters of Cork Harbour.  Double Olympian Maria Coleman, crewing with Laura Dillon, also brings a wealth of sailing experience to this world event.

The selection trial hosted by Howth Yacht Club on Sunday the 13th April was sailed in the ISA J80 fleet. This fleet will also be used for the June event. Three teams were scheduled to sail a series of three round robins. With wind conditions of 15-20 knots very tight racing ensued. Only two full round robins were completed with the final round robin being only partially completed, but the ISA selection committee deemed there was sufficient racing to select the two leading teams. Racing was initially held with spinnakers but due to the wind conditions round robins 2 and 3 were raced without spinnakers.

This event, sponsored  by Cork County Council and the Port of Cork, will consolidate the position of Royal Cork Yacht Club and Cork Harbour on the world map for match racing.   Royal Cork previously hosted the European leg of the ISAF Nations Cup sailed in 1720s and the final of the Nations Cup in 2006, sailed in J24s. Camden Fort Meagher will be the event head quarters and should provide spectators with an excellent view of racing from the cafe deck.

Over 1,100 Sailors will compete as ISAF Sailing World Cup Hyéres 2013-2014 series draws to a close
All Aboard for Budding Optimist Sailors