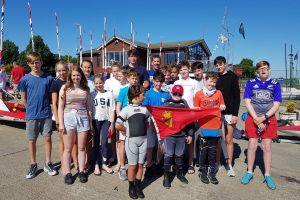 There was a total of 75 dinghies taking part of which there were 61 in the 5.3 fleet with 14 in the 4.2 fleet. There was also a GBR Team who always make the trip to The Nationals.

The Royal Cork had an impressive 18 sailors taking part in the event, with some sailors competing in  their very first event.

The weather was amazing with wall to wall sunshine, very warm with sufficient but unpredictable light wind to make the competition interesting.

As many of you know the race area is in the outer harbour which is some distance from the club, but the sight of 75 toppers heading out under the bridge to the race area was very impressive.

We had 9 races over the weekend but because the winds were very shifty and light at times the first day was very slow in getting the 3 races in.

Day 2 had much better and settled winds and because conditions were so good and the forecast was for zero winds for the 3rd day the race officer got in 4 races. Team GB took first and second spot with Erin MCllwaine taking 3rd place. Rcyc”s David Jones moved up to 6th place at the end of day 2. Christian Houlihan had another excellent day in the 4.2 fleet.

In the 4.2 fleet we had Harvey Matthews 5th and Joe O’Sullivan 7th.

Thanks to  our senior coach Tom McGrath for the coaching over the 4 days, to Rear Admiral Brian Jones for providing his rib for Tom and myself and all the parents who travelled with their sailors and for their rib support. We had a great weekend altogether in Wexford and Thanks to Don and Fiona Ryan for their warm welcome and hospitality. 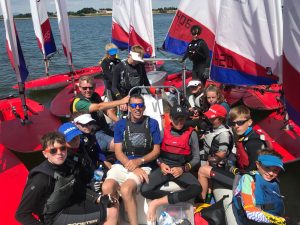 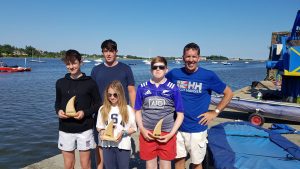