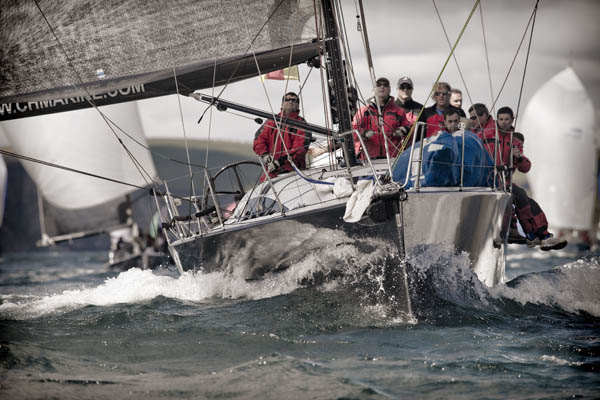 Since the first edition in 2000, the annual RORC inshore championship has always attracted a highly competitive fleet and this year is no exception. Well over 400 sailors from all over Europe will gather in Cowes this weekend for the annual three day event on tight Solent courses. There is mouth watering sailing instore and some scintillating close encounters are expected for four classes organised by tight rating bands.

The sizeable fleet boasts close to 20 yachts that are past or present competitors for the Brewin Dolphin Commodores’ Cup. Winning class at the RORC IRC National Championship is extremely tough and class victors will savour that moment for years to come. In search of the Class One title will be Anthony O’Leary in his Ker 39 Antix fresh from his triumph at the recent ICRA championships in Dublin and also fresh from the same event will be Nigel Biggs  of RStGYC in  his MGHS30 Checkmate XV winner of Class Two, also at the recent ICRA Nationals.

IRC One has produced one of the most impressive fleets for many years. However, the depth of talent in this class is quite remarkable, including some notable proven winners: Anthony O’Leary’s Ker 39, Antix, Michael Bartholomew’s King 40, Tokoloshe,  Andrew Williams’ Mills 39, Dignity, and RORC Commodore, Mike Greville’s Ker 39, Erivale III.

Piet Vroon’s Ker 46, Tonnerre de Breskens, should be the fastest boat around the track. Tonnerre will then be heading for Wicklow and the start of the Round Ireland Race on June 24th to defend her title at that event.  Following  the Round Ireland Tonnerre will head for Cork Week July 7th to 13th , where Piet Vroon is a patron of the event  and is an integral part part of the scene, to enjoy a week of competitive sailing  amongst many leading sailors that will compete at this superb event.