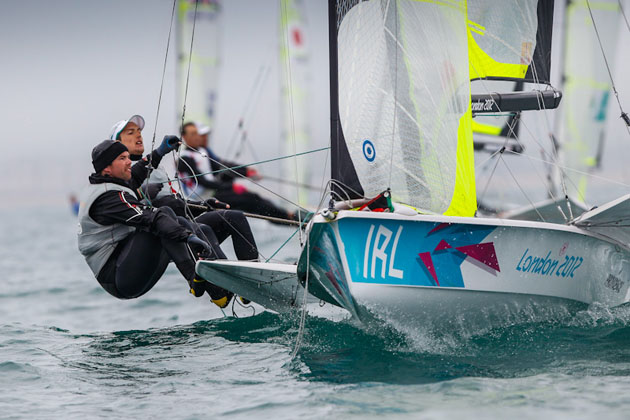 After two days of tricky breeze at the Weymouth and Portland National Sailing Academy, a fresh 15-20 knot south westerly breeze greeted the sailors as racing ramped up on day three of the Sail for Gold Regatta (Tuesday 11 June).

All classes took to the water as scheduled with poor visibility early on and gusts of up to 25 knots across some of the outer race courses.

China’s Lijia Xu and Dongshuang Zhang remain first and second respectively despite black flags disqualifications in today’s second Laser Radial race.  Xu picked up two race wins to give her a ten point lead at the top. Chloe Martin (GBR) is third. However, it was the young competitors from the wider  Cork area that shone here for the Irish. To date Annalise Murphy has been having a poor regatta and to day managed to claw her way to fourth position with Fionn Lyden only one point adrift in fifth.  Lyden enjoyed a first and second today that brought him ahead of Finn Lynch and Séafra Guilfoyle who are now lying sixth and seventh respectively. Darragh O’Sullivan is Ninth and Cian Byrne makes up the top ten. Sorcha Ní Shuilleabháin is sixteenth, and Ross O’Sullivan is nineteenth. What truly outstanding results for these young Irish Laser Radial sailors.

Making the most of the blustery conditions were the regatta’s international competitors in the 49er fleet with Ireland’s Ryan Seaton and Matthew McGovern moving into pole position whilst Australia’s Will Phillips and Rhys Mara posted a consistent set of scores moving them into the podium positions despite falling on the wrong side of a protest decision.

“The first race today was all about the boat handling and getting around the course nice and tidy, with the next three races all about getting the good starts and going fast which seemed to work out well for us,” said Seaton.

Competing for the first time since representing Ireland at the London 2012 Olympic Games last summer, McGovern admits that they were disappointed with yesterday’s results but that everything seems to be falling back into place just in time for the business end of the regatta.

“We were disappointed with our results yesterday as we’ve taken time off since the Games so were a little rusty getting back into the boat, but today our boat handling was good and were happy with our results today. It’s great to be back in Weymouth, we have been competing here for the last ten years since we were juniors so it’s just nice to be back.”

“We have come here to use this as a training regatta for the Europeans and Worlds, so to be in the position we are now is great. If we can stay at the top and mix it up with the Aussies and Brits who are some of the best 49er sailors in the world then we will be happy come the end of the week,” concluded Seaton.

Australia’s Phillips and Mara, a new partnership in the high performance skiff class, are competing for the first time as a 49er pairing with Phillips pleased with their progress on day three of the regatta.

“Today started out really windy, quite cold and rainy with some pretty big waves. As the day went on the wind soon swung to the right and it just became a much nicer day to sail. We started out with a fourth and as the racing progressed we just seemed to get better and picked up some consistent scores which was really good.”

Racing is scheduled to start at 11am tomorrow (Wednesday 12 June) with an expected forecast of rain and 18 -20 knots, with gusts of up to 25 knots.