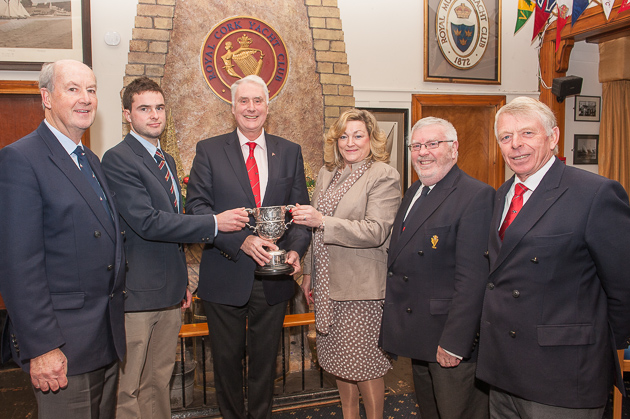 At the Annual Dinner of the Irish Cruising Club held at the Royal Cork Yacht Cub last Saturday night Peter Killen, Commodore ICC, presented the John B. Kearney Cup to the family of the late Joe English together with a Citation which read as follows:

The John B. Kearney Cup: Awarded for outstanding contributions to Irish sailing.

To Joe English for an outstanding career as a word- class sailor sailor. He skippered NCB Ireland in the Whitbread Round The World race in 1989-90, took part in the same race on ‘Tokio’ in 1993-4, participated in many Admiral’s Cup races and was involved in a winning America’s Cup team. In 1979, while based in Sydney he competed in several major events including the Southern Cross and Kenwood Cup series. In 1980 he won the one ton sailing cup with Harold Cudmore on the Tony Castro designed ‘Justine’ and also won the two ton cup in Sardinia a week later. Joe was central to the development of the 1720 sportsboat.   Diagnosed with early onset Alzheimers disease at age 51, he died at age 58 on November 4th, 2014.

Joe’s wife, April, and son Robbie accepted the award on behalf of the family.