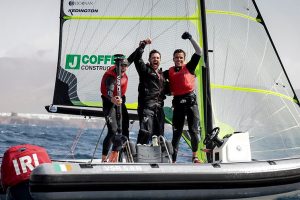 Howth and Skerries pairing of Robert Dickson and Sean Waddilove have done enough to secure not only Ireland’s Olympic slot in the 49er skiff, but also to be the Irish representatives in Tokyo. Having secured the spot with a race to spare, they showed a clean pair of heels to win the final 10-boat medal race which propelled them back onto the podium at the 49er Olympic Qualifying regatta in Lanzarote.

Unfortunately, that means the Royal Cork’s Seafra Guilfyole and his helm, Carrickfergus based Ryan Seaton, have narrowly missed out on qualification for the games despite a 12th overall from the 44 boat fleet.

Full results from the single series decider are available here.