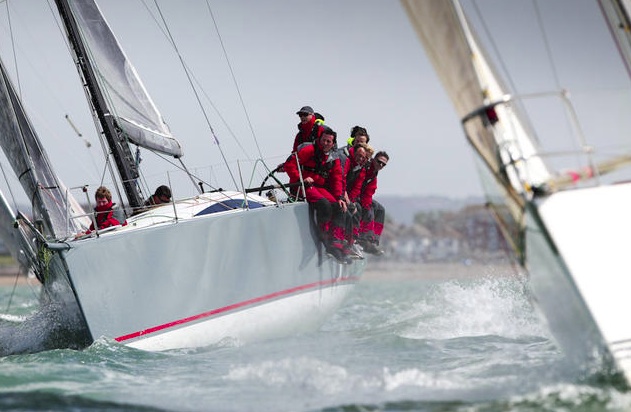 It’s a long way to the top if you want to rock ‘n roll and, under pewter grey skies with big breeze and frequent rain squalls, the sailors today had a harsh introduction to the RORC IRC National Championship.

Shortly after the first start, the international fleet got a taste of the wicked conditions, as an angry 35-knot gust ripped through the racecourse. Fortunately, it was to be the biggest blast of the day but the wind rarely dropped below 20 knots and rain peppered the competitors throughout the three races. Spotting the huge gusts and nailing manoeuvres were vital to success. Some passed the test with flying colours, others returned to shore with shredded sails and dented pride.

In IRC One, Piet Vroon’s Ker 46, Tonnerre de Breskens, started the series with a disappointing tenth, but came back firing on all cylinders to win the next two races and lead class one overnight. After racing, Piet Vroon commented: “It is a simple rule but he who makes the fewest mistakes usually gets the best results. We didn’t break anything today, not even a sail batten, and that is all down to the crew being careful and handling the boat well. I was especially happy with our results today, as on short courses we do not have a lot of time to make up our time handicap on other boats, it was great effort by the crew today, it really is all down to them.”

Anthony O’Leary’s Ker 39, Antix, is second in class after three races. “We kept the sails above the boat today and to be honest I was too pre-occupied with that to notice those who didn’t manage it. In those conditions, you keep your eyes on the road!” Jan Persoons sailing Grand Soleil 43, Il Corvo, had a consistent day to claim third overall in the big boat class. Mark Devereux’s Swan 42, Brevity, started well but the crew will probably remember the day best for their über-Chinese gybe. Also racing in Class One is Conor Phelan’s  Ker 37 Jump Juice who finished ninth.

Racing at the RORC IRC National Championship continues tomorrow (Sat) with three races scheduled. However, it may be too early to put away the wet weather gear as the weather forecast is suggesting fresh to frightening conditions for the second day of the regatta.