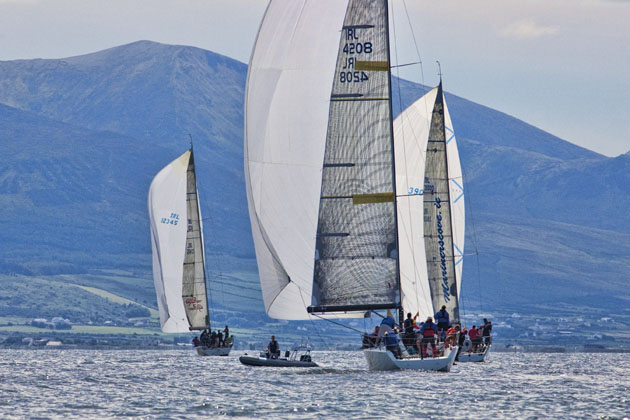 If you haven’t entered yet ICRA advises it would be wise to do so as entries are coming very steadily and there are large demands on accommodation and berthing requirements .  If you have entered already but have not sorted out your accommodation and berthing requirements, it would be prudent to do so as soon as possible. This is a major event in Irish sailing and each fleet is building up nicely, with intense competition expected across the board. Two classes are expected in “White Sail/Non Spinnaker” and just because spinnakers will not be flying does not mean these classes will not be fought tooth and nail, in fact they are now such an attraction that competition is even more intense than in some of the other classes if such a thing is possible.

A superb Class One Fleet is building and In fact is now emerging as a terrific class for the ICRA Nationals.  Entry includes four J109’s, including defending champion Ian Nagle’s “Jelly Baby” from RCYC, former Champion Pat Kelly from Rush SC and HYC in “Storm” and from the Royal Irish both Declan Hayes in “Indecision” and John Maybury in “Joker 2”. These will be joined by Paul O’Higgin’s competitive Corby 33 “Rockabilly” RIYC/ NYC, along with Denis Hewitt and gang in “Raptor” RIYC and Derry Good’s X362 sport “Exhale II” from RCYC to name but a few.

The West Coast will be represented by Dan Counihan’s First 36.7 ,“Galileo”, from TBSC and Barry Heskin from GBSC in “Now What”. The Galway Bay Dubois 33 of Barry Heskin, featuring many of the stalwarts from the Joggernaut days in a now toned down version. Martin Breen, also, from Galway will make his presence felt when it comes to results, so watch this space and see the west awake!

Lastly, a very exciting new boat will join the fray – Colin Byrne from Royal Irish will be competing in his new X33.   Rumour has it that she is a flyer and has yet to be even named!

So, all classes are attracting genuine quality, in what promises to be a great event on the water and a real sailing carnival ashore.

Good news is that the discount entry date has been extended to 15th May, so get your entries and payment in now to take advantage of this very generous offer.

Don’t miss the unique opportunity to compete in the magnificent waters of Tralee Bay for the Irish Cruiser Racing Association’s National Championships in conjunction with WIORA’s own championships, both in IRC and ECHO. 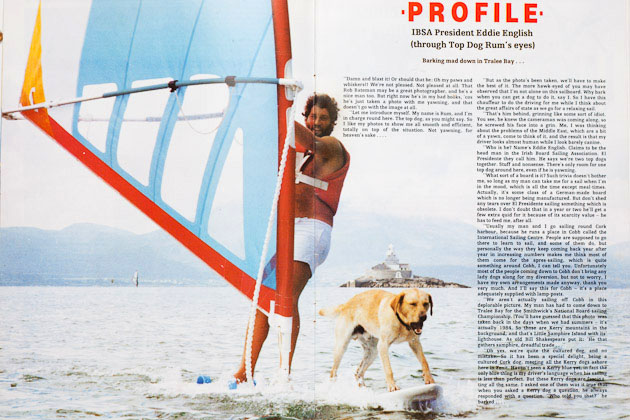 Eddie and the famous ‘Rum’ pictured in Tralee Bay in 1986. Photograph Robert Bateman

Here your scribe feels the necessity to add some very personal and warm memories of Fenit going back to 1986 when the sun always seemed to shine and there were lovely warm winds.  It was a case of location, location, location.  It was 1986 the year the Irish Boardsailing Association held it’s National Championships in Tralee Bay and the sailing maestro Eddie English of Sail Cork, was the President of the Association. Board Sailing was then at the height of its popularity and it was nothing a see a hundred plus boards at the start line of the Championships.  Nik Kershaw’s rendition of ‘I won’t let the sun go down on me’, still played today, sticks in my mind for ever as it played non stop from morning till night and contributed in no small way to the absolutely wonderful atmosphere that Fenit still exudes.

1986 at that Championships was also the year the well known sailing writer and author W.M. Nixon, writing in Afloat Magazine (Afloat.ie), produced a wonderful two page  centre spread with an article written through the eyes  of Eddie’s wonderful canine companion the famous ‘RUM’,  long since gone to his doggie heavenly reward. The pair were pictured, both sailing on the board, against the glorious backdrop of Samphire Island.  Now of course there is also a very fine marina added as well.

All this is only to indulge my memories of what a wonderful location Fenit is to have an event such as the ICRA/WIORA Championships. For anyone who hasn’t enjoyed the experience of attending an event there they now have the opportunity to do so and be assured they won’t find it lacking.