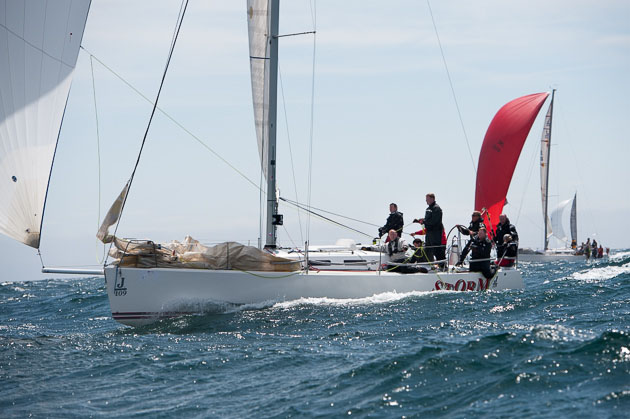 ICRA Nationals this year will take place from 13th to 15th June in the Royal Irish Yacht Club; this will be the major cruiser racing event on the East coast for 2014.

Arrangements are being finalised to provide top class racing to decide National Champions in all divisions.  A vibrant social scene is planned for all the shoreside activities.

To date a high calibre fleet of 42 boats has entered from all around the country and across the Irish Sea, creating real anticipation that the previous record of 125 yachts competing will be exceeded. Also with the emphasis by ICRA to look at new divisional break-points in an effort to provide great racing for all, Divisions 1 & 2, Divisions 2 & 3 and Divisions 3 & 4 might be looking a bit different.  Racing will be under Endorsed IRC and Progressive ECHO. There will be a Club Team trophy and a new trophy for the boat with best aggregate score in Irish IRC’s and Welsh IRC’s.

In Division 0, Jump Juice will make a welcome return to challenge Crazy Horse and WOW with Tsunami also in the mix. The entries from the Scottish First 40’s are awaited together with the challengers from Wales.  Anthony O’Leary’s Antix will be away with other Commodores’ Cup boats leaving the Division ready to crown a new champion.

As it is at the moment, Division 1 has a really exciting line up developing with Paul O Higgins Rockabill taking on a clutch of seven J109’s including previous Champion Pat Kelly’s Storm, Liam Shanahan’s Ruth, John Hall’s Something Else, John Maybury’s Joker II, visitor Peter Dunlop’s Mojito, Stephen Tudor’s ISORA Champion Sgrech, Rob McConnell’s A35 Fool’s Gold and the crewed-up Fox & Sox with yet more challengers to enter.

Division 2 is also building nicely with Nigel Bigg’s Checkmate lining up against the Corby 25’s Smile, Rob Allen and Noonan Chambers Impetuous and the well-travelled Shane Statham and Trudy O’Leary’s Slack Alice. Adding to all these the hot Tonners King One,The Big Picture and visitor Movie Star Blue. And where is Dick Dastardly?

Division 3 will see the Quarter Tonners Cri-Cri Paul Colton and Supernova of Timbs, Monaghan, Costello and McStay form the basis of what no doubt will also be a very competitive fleet. Also into this will be Cartoon, Quest, Sigma 33 White Mischief, J24’s Jebus and Euro Carparks.

Division 4 will also be competitive with local boats of Asterix, Gung Ho and Taiscealai, UpD8 and Saki to the fore.

The 25% discount entry date is 14th April so get your entries in now.