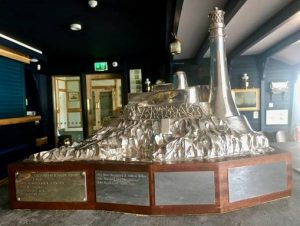 The ICC Fastnet Award has recently been presented to the Royal Cork Yacht Club in recognition of its tricentenary. Admiral Colin Morehead received the trophy on behalf of the Club, with a formal presentation to take place when we hold the Cork300 Gala Dinner. Since it’s inception in 2006, this beautiful Trophy is awarded by the Irish Cruising Club for a range of nautical achievements with some very notable past winners. It is not presented every year which adds to its importance. It is a silver model of the Fastnet Rock and lighthouse on a mahogany base and is truly a striking and lovely Award.

It was first awarded in 2006 to Barry and Cunnane following their amazing feat of sailing a circuit of the Arctic transiting both the Northwest and Northeast passages.

In 2008, Sir Robin Knox Johnston was the selected winner, and then in 2010 it was presented to the 100 year old ex-submariner, Bill King, who was the first Irish sailor to circumnavigate the globe single-handed in his yacht Galway Blazer II which he achieved after several attempts and many adventures including a collision with a whale.

In 2011, it was awarded to a Crosshaven native, Killian Bushe, for both his sailing and boat building achievements. He won the Half Ton Cup as one of the crew sailing Cork built Silver Shamrock, among many other sailing achievements including a circumnavigation. He has moved on from racing to boat building, following a formidable family tradition and been involved in building four successive winners of the Volvo Ocean Race.

The yacht club has also been asked by the ICC to be the custodians of this prestigious Trophy going forward, which is a great honour.