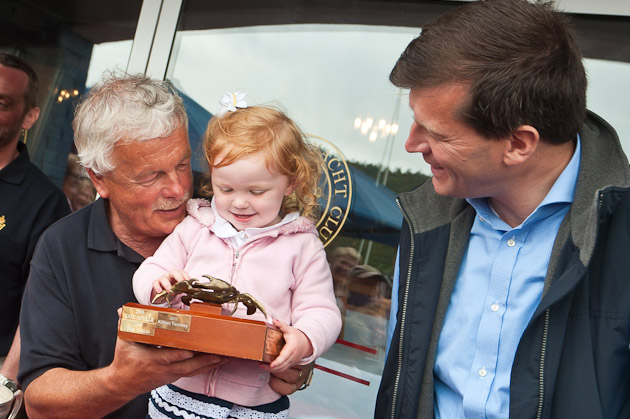 Good winds and great atmosphere ashore made for an excellent two day Neville Jewellers At Home Regatta.  Plenty of stories were to be had from the Saturday racing even to one account of a spinnaker being blown to shreds on a Class Two boat and a Laser losing its mast on Day Two and a young competitor going overboard from his Optimist.

The fleets were a little depleted as the Laser National Championsips were taking place in Dublin and the Royal Cork was represented in all three divisions, Standard Rig, Laser Radial and Laser 4.7. Nonetheless the turnout at Crosshaven was excellent.

The At Home dinner took place on Saturday night and an excellent evening was enjoyed by all with members enjoying the convivial atmosphere, good food and many exchanges of salty dog stories around the tables.

The Family At Home day ashore on Sunday, in addition to the fleet racing in the harbour, was packed with activities including face painting, bouncy castles, and bubbles floating everywhere from the bubble guns provided for the kiddies.  Forty Two children took place in a hard fought tug of war.  The famous, or infamous, Optimist Parents race took place at the marina in front of the club and had great racing with even greater encouragement from the spectators, even if it took in some over use of tillers and some ingenuous interpretations of the sailing rules!  The eagerly awaited Admirals Boules match had a splendid entry of twelve a with a ding dong battle for surpremacy between former Admirals T.E.Crosbie and Kevin Lane with the latter emerging the winner by the narrowest of margins.

Throughout the afternoon the Admiral’s Lady, Judy, and her band of willing helpers kept the hungry hordes supplied with copious quantities of scrumptious sandwiches and cakes supplied by the ladies of the club. The children had their own designated area where they were supplied with delicious treats, goody bags, had their faces painted and received squiggly balloons and had high jinks on the bouncy castles keeping their parents well occupied running around after them.

Finally, the prizegiving took place with the prizes being presented by the Sponsor, John Neville, and the Admiral presenting the trophies. The Admiral having thanked the Sponsor, the day came to a close with unanimous agreement that it had been a wonderful weekend.