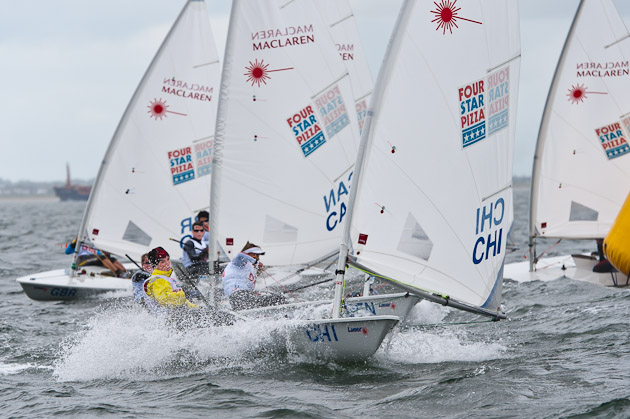 Whilst many of his key rivals in the 58 boat Laser Radial Boys fleet struggled for such consistency across another two challenging races in moderate 8-13kts breezes, Lynch elevated himself to third place overall with just one final race scheduled tomorrow (Friday).

First and second steps on the podium appear very much out of reach for the 16 year old helm who is racing at his first Youth Sailing World Championship and he faces a tough showdown with the Norwegian Hermann Tomasgaard who is only one point behind.  While Lynch has risen to the occasion, sailing a mature regatta considering his years, Tomaasgard is the reigning Laser Radial Youth World Champion and was one of the favourites to lift this ISAF Youth Sailing World title.

Lynch is certain he has felt no home advantage:  “ I really have not felt that comfortable at all, not in any of the races just because it has been so unpredictable. I had some luck today.  It is so unpredictable I can go out there and get a 40th tomorrow, so I will just concentrate on the same things and try and get a result.”

In the Laser Radial Girls class Ireland’s Sophie Murphy remains in 14th place after a mixed day on the water. After concentrating on her school studies this winter and spring she has raced fewer regattas than many of her rivals, but nonetheless has remained solid in the top third of the fleet.

The Royal Cork 420 duo of Patrick Crosbie and Grattan Roberts lie 15th after finishing their penultimate day with a seventh, though a bad start in the earlier race left them struggling to achieve a twenty first.  “We were dead on the start line, left behind with no speed which was not good. But the second race was so much better.” Said Roberts.

The final race of the series is scheduled for tomorrow and while there are some who are certain of their gold medals by virtue of their unassailable results, there will be a large number of ding dong close battles for gold, silver and bronze .  Who knows what may happen if there are to be light winds as has been predicted.