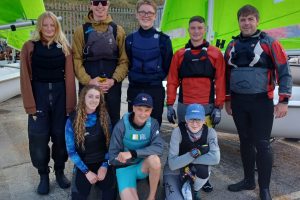 By Maurice Collins on September 19, 2022 in Junior Sailing, Lasers, Uncategorized

Established in 1944 , the Sutton Book Trophy (‘the book’) is arguably the oldest team racing event in Ireland which has seen Royal Cork dinghy sailors do battle with Sutton Dinghy Club sailors in order to establish which club gets to win and retain ‘the book’ year on year.

Stephen O’Shaughnessy reports on the 2022 event which was held in Sutton Dinghy club on Sept 10th.

Last weekend, Sutton Dinghy Club played host to the 2022 iteration and as is always the case with Sutton Dinghy Club , the Royal Cork sailors were warmly received over breakfast prepared in the clubhouse prior to the race briefing.

Competing for the Junior Sutton Book , the Royal Cork Junior team were first to hit the race course in a light warm northly breeze and the sun shining. The team was made up of a cross section of our many talented junior dinghy sailors from the RCYC Laser, Optimist, 29er and Topper club fleets.

Isabel McCarthy , Megan O Sullivan, Fionn Daly , Oisin Pierce , Liam Duggan and Jonathan O Shaughnessy (Captain) all worked in a cohesive manner and sailed very well as a team to secure the overall win and retain the Junior Sutton book trophy for the second year in a row. 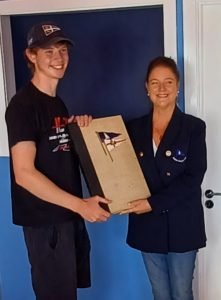 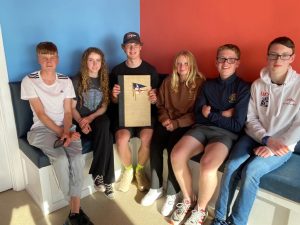 Next up were the senior teams and by the time they were ready to compete, all the signs were that the breeze would fade as the afternoon wore on. None the less the race officer did very well to get three races completed with Sutton winning by two races to one and deserved winners in the conditions.

The prize giving was conducted over dinner hosted by Sutton Dinghy club members for all competitors and their wider entourage. The Junior Sutton book was presented to the team and will remain in the Royal Cork clubhouse for another 12 months. The Senior Sutton Book will remain in Dublin for now but the Royal Cork sailors are already looking forward to try and wrestle the book back to Cork in 2023.

Special thanks to Royal Cork club member Richard McGlade for organising the 2022 team and great to see the competition is still very much alive 78 years on.