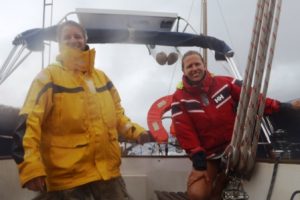 This Saturday, 21st July, sees Ian Heffernan, return to his home town, Crosshaven, having sailed all the way from Sydney.  A lifelong dream, Ian’s journey began in Sydney in January 2011 and has seen him and his crew and girlfriend, Laani Pegler, sail to New Zealand, across the Pacific taking in the French Polynesian Islands, Galapagos, Panama Canal, Caribbean Islands, Bermuda and the Azores.  A blog of their travels aboard steel yacht ‘Kadoona’, an Ebbtide 36, has been closely followed by many friends and family in Australia & Ireland (www.kadoona.weebly.com).  The journey has been dubbed ‘The Wrong Way Around’ due to the fact that it would be more usual to make this journey the other way across the world. However due to the Somali pirates who patrol the Indian Ocean and Gulf of Aden this has made these waters perilous for sailors.

Ian Heffernan will be known to many members both as Ray & Jacqueline Heffernan’s son but also as a ferry boy during the late 80s and 90s.  After school in 1994, Ian attended the then RTC, now CIT, to study Nautical Science.  He obtained his Master ticket in 2005 the highest rank in the merchant shipping.  2010 saw Ian return to his studies at the NMCI, by distance learning from Sydney, to complete his Bachelor of Science (Hons.) Nautical Science. He was awarded ‘Best Honours Degree Student’, a very prestigious award given to the top performing students at the college.  In addition to his degree, and while in Australia, he also obtained a compass adjusters qualification.

Ian’s career has seen him working mainly on research ships, primarily the British Antarctic Survey.  British Antarctic Survey is one of the world’s leading environmental research centres and is responsible for the UK’s national scientific activities in Antarctica. Ian worked on three of their ships as 4th Officer, 3rd Officer, 2nd Officer and Chief Officer.  These ships are primarily logistic ships used for re-supply of their three stations in Antarctica.  Ian also spent a winter in 2003 at their research station at Rothera, Adelaide Island as a Boatman.  Those who winter in Antarctica are essentially cut off from the rest of the world because the frigid Antarctic temperatures (minus 80 degrees Celsius) make it impossible for planes to operate.  Winterers must also endure total darkness until the sun rises again in austral spring.  This was Ian’s most challenging but rewarding and memorable post.

It was while working as Safety Officer on-board the Amazon Explorer in 2006 that Ian met Laani, from Perth.  From 2008 to 2011 he worked as a Communications Superintendent for Sydney Ports.

Ian, Laani and yacht Kadoona are expected at Roches Point this Saturday at 3pm and a flotilla of boats will be waiting to greet them.  The celebrations will continue back on shore at the Club at approx. 4pm.  All are welcome so please come along and join in the celebrations, either on the water or back at the Club. 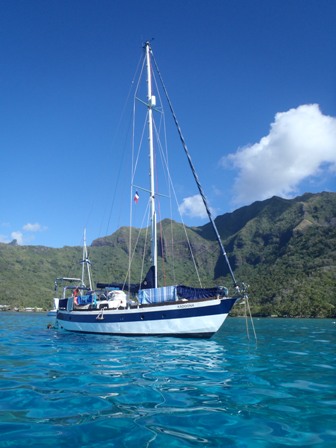