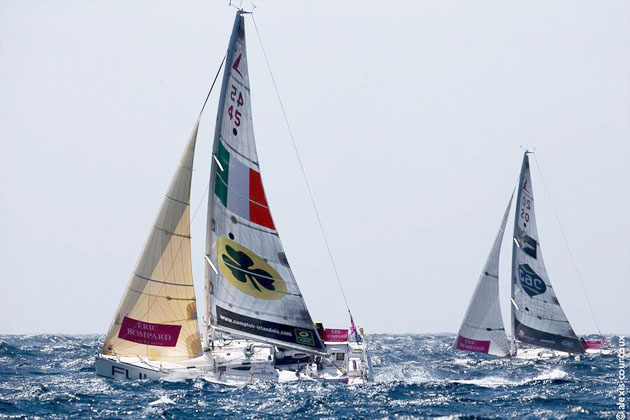 Alexis Loison (Groupe Fiva) won his first ever leg of La Solitaire du Figaro – Eric Bompard Cashemire this afternoon as he crossed the line in Plymouth at 14:53:50. This is the Frenchman’s second win in the city – he was victorious in last year’s Fastnet race, sailing double-handed with his Dad. Loison’s decision to stay East of the fleet as they raced from Roscoff to Plymouth paid off. When the wind died he had a better angle for the approach to Plymouth Sound.

Alexis Loison :
“This is fairly new for me to win a leg! This explains why I have been on this circuit for nine years, this is what I came for. Before departure, everyone was teasing me, telling me “you never lose in Plymouth!” I’m super happy with this leg, I have worked well all along. I saw the shift coming in the East. It was the surprise this morning to see that I managed to slip below them. I played with the current, it was worth it for arriving in Plymouth. Indeed, we’ve had numerous different weathers on the leg, we had everything from calm conditions, to wind, and rough seas. It really was not easy. There has been a lot of transitions and leaders changes. Sometimes there were people coming out of nowhere, finding themselves leading, and vice versa. I am pleased with myself but the last part of the race was tough. One year ago, I was winning the Rolex Fastnet Race here in Plymouth, they should have more race arrivals here!”

This first leg saw the 38 solo sailors make three channel crossings over the 484 mile leg. Keeping the boat and themselves going was difficult at times.

David Kenefick : “I finished 28th, I think and I feel slightly disappointed considering I was doing a lot better earlier on in the leg, With just a little more experience you know how much harder you can push yourself. I started this race fresher than last year so I had a bit more energy this year but in total I had three hours sleep across the three days, I’m pretty tired.”

This is the first time the race has ever been to Plymouth’s Sutton Harbour and the first time in 11 years that it’s been to the UK. The sailors were greeted with blue skies and a warm welcome. Time now for them to catch up on some sleep before the start of Leg 2 on Saturday evening next from Lands End, around the Fastnet and finishing in Roscoff. Weather is predicted for light winds and with a distance of over 500 miles it is likely to be a long race for the solo sailors.