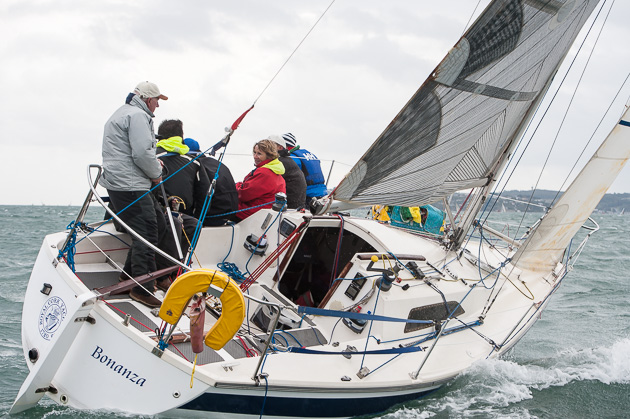 If the weather played rough at the start of Calves Week today, one of the engines on the committee boat also decided to play up, but the quick witted International Race Officer Alan Crosbie, was not fazed, picking up the first available mooring and starting the race from there. This move worked out just fine for the six fleets who went on to have a tremendous day of racing though not without some resulting benefit to the Sailmakers and a few retirals from racing. They had a flying start twith all fleets enjoying a thrilling windward/leeward course around the islands of Roaring Water Bay in a stiff south westerly gusting up to 30 knots and a 2/3 metre Atlantic swell.

The prevailing weather conditions this summer had prevented a number of crews travelling from clubs from the Western and Southern shores in the days before the well-established sailing festival.  Talk at the pre-regatta launch on Monday 3rd August among the skippers of the 65 boats that had made the trip was that the forecasted low pressure systems threatened a delayed start, or even a cancellation of the first day’s sailing.

The forecasted conditions eased overnight and Race Office Alan Crosbie was able to send the six fleets out on a windward course up to Goat Island.  The Class 0/1 and 2 cruiser fleets were sent on a long and testing run outside Long Island with boats reaching substantial speeds as they crossed the swells.  The Class 3 and 4 cruiser fleets and the two Whitesail fleets stayed within Long Island Sound which made for thrilling sailing and great viewing for people onshore as the fleets crossed each other close to the mainland and a few spinnakers dramatically blew out.

The challenging conditions suited Paul O’Higgins Corby 33, Rockabill V (RIYC) who took line honours ahead of Conor Doyle in Freya (KYC) in Class 0/1, IRC and Declan Hayes on Indecision (RIYC). In ECHO, Rockabill V was third, behind the other two.

In Class 2 new participant to Schull Fergus Coughlan on Jedi (Cove Sailing Club) took both titles ahead of Leslie Parnell on Black Velvet (RIYC) and Frank Desmond, RCYC, on the Desmond/Deasy Ivers Bad Company.
Class 3 IRC and ECHO had the same boats in winning order with Judy McGrath’s Bonanza 28 (RCYC) coming in ahead of Billy Burke and Danny McCarthy’s Sigma 33, Muskateer,  and Dave Lane and Sinead Enright on J24 Yougottawanta (RCYC).

In Whitesail 2, Frank Murphy on Dreamcatcher (SHSC) came in first ahead of local rival Martin Lane on Chatterbox with Tom McCarthy on Ashanta (ISA) sharing third on corrected time with Paul Taylor on Sea Psalm (TBSC).

Another Royal Cork Yacht Club Maritime Author to add to our ranks with Capt. Cormac MacSweeney’s new book
A Long Day At The Fastnet