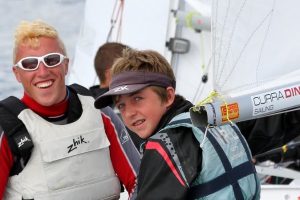 The Volvo 420 Class National Championships concluded here today with brothers Harry and David Whitaker of the Royal Cork Yacht Club taking the title in style.  In a quality fleet of 32 sailors from all over the country they proved their consistency by never finishing outside the top three boats in any race.

Race officer Richard Leonard expertly managed to complete a full series of nine races between Friday and Sunday with some sparkling sailing to be seen just south east of Roches Point off the entrance to Cork Harbour.  The conditions were very variable with extremes of exciting upwind and three sail planing on Saturday afternoon being in contrast to the tense drift finishing on the last race on Sunday.

Robert Dickson and Sean Waddilove of Howth Yacht Club put up the main challenge and indeed had more first places than the Whitakers but had to settle for second overall to the ever consistent brothers. Robert and Sean have been having a great year to date as Irish 420 boys boat for the ISAF youth Worlds in Cyprus.

Third boat was Ewan McMahon and Colin O’Sullivan, also of Howth, who put in some excellent performances particularly in the earlier races. Being younger and relatively newer to the class they certainly have made great progress in double quick time.

The next locals Peter McCann and Arran Walsh of Royal Cork put in a very creditable series to end the championship in fourth position.

Best of the ladies in sixth overall were cousins Lizzy and Cara McDowell of Malahide Yacht Club whose first place in the last race was enough to jump ahead of Cliodhna Ni Shuilleabhan and Jil McGinley (Kinsale Yacht Club and Royal Cork) for the ladies title. Third ladies were sister team Kate and Alanna Lyttle of Royal St. George Yacht Club.

The split for Silver fleet is made depending on the results over the first number of days and prior championship results and this fell in the favour of past oppie ace Dougie Elmes crewed by Mark Bolger (Royal Cork and Baltimore Sailing Club) who had ended the series in tenth overall. Second silver was taken by Phillip McDowell and Cian Buckley of Malahide with Alacoque Daly and Anna Kelly (Tralee Bay Sailing Club and Royal Cork) taking the third silver.

For many of the leading sailors this event sets them up nicely for their next challenge as no sooner were the boats back in the dinghy park on Sunday than they were being loaded onto a big trailer and off to Pwllheli in North Wales immediatly for the 420 Junior Europeans which start later this week. We wish our new National Champions,  Harry and David, along with all the other Irish sailors competing in this prestigious event the very best in what will undoubtedly be a great experience.

Paul Keal took some lovely photos on Saturday and Sunday and at the Prizegiving.
See photos in the club gallery – Saturday – Sunday – Prizegiving