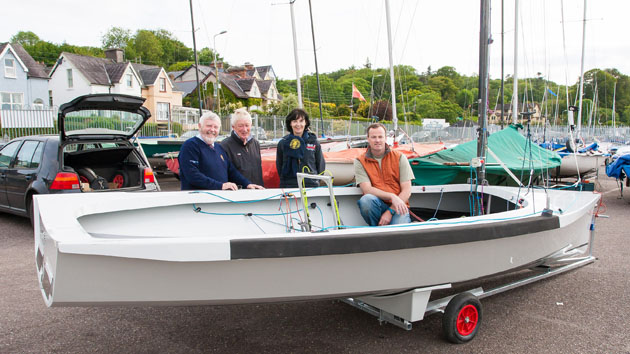 Tom MacSweeney gives the history of the National 18 and the latest exciting development of the Class:

The National 18 Dinghy Class has a great sailing history which it traces back to 1938. Its 77th year of existence was marked at the Royal Cork Yacht Club in Crosshaven on Monday when an exciting new design of this legendary boat arrived, marking the completion of a four-year project.

Dom Long is President of the Class which covers the UK and Ireland, with Cork Harbour being a stronghold.

“It has been a challenging project, with a lot of hard work done by a lot of people for the future of the Class,” he said.

The National 18 Class is unique in being the only three-person centreboard trapeze dinghy which, from its development, has achieved a particular niche in sailing. It has strong loyalty and support. To maintain this, there was a lot of consideration and discussion within the Class. Traditionalists had one view, those concerned about what they saw as static numbers and a need to develop for the future another. The debate culminated in a decision at the 2011 Cock o’ the North and Class Championships in Crosshaven to pursue the new design. The ‘Cock’ is probably the legendary competition associated with the National 18 Class and by which it would be well-known.

“It was a decision which recognised the niche the National 18 has established, but recognised that what was needed for the future, while retaining existing sailors, was to move beyond what looked like being a static situation and perhaps decline, unless there was change, to preserve the boat and the Class and attract new members.”

A world leading dinghy designer, Phil Morrison, was commissioned and the prototype called ‘Odyssey’ was produced and subjected to extensive testing. “A wider transom, hard chines, finer bow, flatter bottom and a weight reduction” were amongst what the Class Development Committee looked for. RCYC sailor, Colin Chapman, who is the Class Vice-President, specialising in technical aspects; Tommy Dwyer, Dom Long, Peter O’Donovan, Jeremy Vines and Kevin Davidson, were the Class sailors given the task of overseeing the development.

The new boats have been built by White Formula UK Ltd. of Brightlingsea in Essex, a company operated by sailors themselves who have been successful at the Olympics and in European sailing events.

Colin Chapman is one of the owners of the first four new boats that arrived on Monday at the RCYC where I saw them being rigged. Mast and rigging is transferable from the older National 18s. Tommy Dwyer, Tom Crosbie and Nick Walsh own the other three. Four more are on the way for Jamie Dwyer, Davy O’Connell, Andy Crosbie and Dom Long. Three more of the new design re being built for English and Scottish owners and the intention is for more to be built as the Class looks to a new era.
“It will need a new mindset to sail them,” said Colin Chapman as he rigged his new boat to take it on its first sail. “They will be challenging. They are a great innovation for the Class.”

Dom Long, a dedicated National 18 enthusiast, pointed out the changes as I looked at a boat, with a lovely flare to its hull, an impressive bow design, a dinghy that looks like it will be fast, powerful, exciting to sail.

“They are lighter than the older design and are designed to be easier to right in the event of a capsize, so that they float better in the water for the crew to achieve that,” said Dom. “It has been a long project, but we are delighted with the outcome. Now that they are here the next thing is to get them sailing, but also to ensure that the Class continues and that the existing, older boats, are still kept active and sailing.”

The boats are stiffer, with three mouldings, internal buoyancy and strategically-
placed fittings. It should make trapezing on the wider deck space particularly exciting.

The older design which the new boats replace are called the ‘Ultimates’ the new ones the ‘Ultras’. There are some of the wooden National 18s that are still sailed and are still impressive ‘Classics’.

“Change is always challenging and can be difficult to accept, but it’s a sign of the strength of the National 18 Class and its positive outlook for the future that this new design has evolved after a lot of consideration, which has proved fruitful,” said Dom Long. “It will bring changes in the Class and we may have to look at the handicap situation to provide equal sailing for everyone, but we will do that. This Class is resilient, it has proved that and this new design shows that it is alive to the future and the successful existence of National 18 sailing will continue.”

Brian Wolfe’s definitive book – ‘National 18-foot Dinghy’ – documenting the history of the Class, recorded 378 National 18s built in which he observed: “In compiling this history, I have become aware of the hold that the Class has on people who, once hooked, find great difficulty in escaping its clutches.”

The new National 18 will, doubtless, continue to have that hold on sailors. Once seen, it will be hard to avoid.