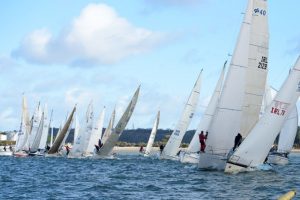 Last Sunday saw the start of the O’Leary Insurance Group winter Series. We have 35 boats entered for the series this year which was a massive increase from the 23 boats we had last year.

Sunday was a beautiful sunny November day with 10 – 14 knots from the north west, the start of the race was right on the bottom of a very low tide, which made it very difficult for the RO’s (Clem & Wendy McElligott) to find space for all 33 boats that lined up for the all-in start. After the one general recall, the fleet got off and sailed a great course of No.10, E2, No.8, NO.5 finish at Cage. The Winter series has always been about the all-in results in IRC and ECHO and last Sunday it was past Admiral Ted Crosbie’s boat ‘No Excuse’ that took the Festive voucher from Durcan’s   Butchers, winning both IRC and ECHO. Kieran Collins on ‘Coracle IV’ took home the other voucher finishing second in IRC. Full results here.

Next week will be the second race of the series and the following changes will be implemented, Class 1 & Class 2 will be merged as there is now only 2 boats in Class 1 after Ria Lyden was forced to retire from the remainder of the league last Sunday due to damage to her boat ‘Ellida’. Also, the WS Class will be split into two classes (WS 1 & WS 2) as there are 16 boats entered in this Class which is double the entries from last year, the split will be set at WS 1 0.901 and above and WS 2 0.900 and below. Look forward to seeing you all out again this Sunday.

Also, a reminder that the end of year Prize Giving will be on the 17th of November at 8pm in the club

Time for the Frostbites!
Topper and Laser Frostbites commence