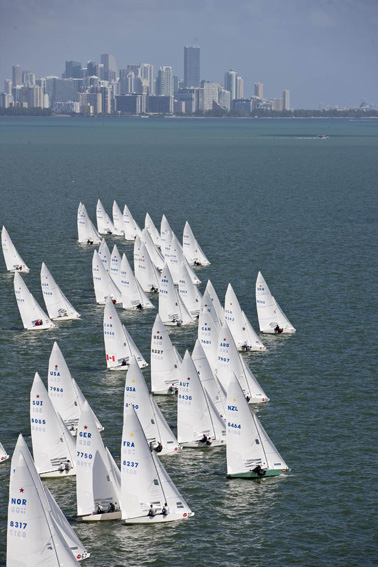 In the end there was to be disappointment for O’Leary and Burrows at the Bacardi Cup.  However, this of itself shows their current high level of performance and just how far they have come to be disappointed at second place in this prestigious competition despite having had two firsts in their score and discarding an eighth.  However, at the end it was possibly the lighter wind in the last race that frustrated them nonetheless leaving them with a brilliant result. It was in fact an exact replica of the previous year’s result when they again finished in a brilliant second place. Looking at this year’s scoreboard their total score was lower than anybody else over the six races but, in the scoring system that is sailing, the eventual winner had to discard a fifteenth whereas O’Leary/Burrows were only discarding an eighth and this in fact shows the actual measure of their performance and just how good they are.

With five races already on the scoreboard, the Star fleet yesterday completed the sixth race for the 85th BACARDI Cup, being held for the 50th year in Miami.  Briefly postponed, the final race for the Stars got underway with just seven knots of breeze from the east southeast.  The Swiss team of Flavio Marazzi and Enrico De Maria who had not figured in the earlier results, were across the finish line first followed by Miami’s own Augie Diaz with Bruno Prada, and 2008 Star World Champions Mateusz Kusznierewicz and Dominik Zycki (Poland). The winners Xavier Rohart and Pierre-Alexis Ponsot (France) were across fourth, followed by 2008 Olympian Peter O’Leary and David Burrows (Ireland).  By finishing ahead of the Irish team, the French team of Rohart and Ponsot, who had started the day with a two point lead on O’Leary and Burrows, increased the point spread by one to win the championship title with 13 points.  O’Leary and Burrows, with 16 points, and Kusznierewicz and Zycki, with 18 points, filled out the remaining podium spots.  Diaz and Prada, with finishes of 11-4-7-5-8-2; 26, moved up to fourth overall, with day one leaders, Austria’s five-time Olympian Hans Spitzauer and Gerd Habermueller, finishing fifth overall with 29 points. Nin O’Leary and Rodney Hagebols in their first ever Star experience had a remarkable event culminating in eleventh position and at all times being in the top third of this world fleet.

With the Olympic Regatta looming ever closer and the advantage of having two boats and a superb pacing partner in Nin O’Leary, Team O’Leary Burrows can now concentrate on their light wind performance and be ready for anything that may be thrown at them for the mixed conditions that may be expected  at Weymouth.

At the end of the day look at it this way.  Peter O’Leary and David Burrows had two wins and the other three races that counted were all in the top five and this in a fleet of 65 boats.  There is a huge positive to be taken from this performance.

Tonight (Friday) O’Leary and Burrows are two points off leaders Xavier Rohart and Pierre Alexis  Ponsot of France  as they head into the final race tomorrow of the Bacardi Cup for the International Star Class.  What great results the duo had today with a first in Race 4 and a fifth in Race 5.  The overnight leaders the Polish team of  Mateusz Kusznierewicz and Dominik Zycki slipped to third place so it’s all to play for tomorrow in the final race.  However, it looks as if O’Leary should have a podium finish even if he needs to carry his worst score of eighth into the calculations.   Rohart and Kusznierewicz are two extremely dangerous opponents and where they are concerned nothing is ever over until the fat lady sings.

The tension is too much for your scribe!!

Peter O’Leary and Richard Burrows scored a first and fourth at the two races held in the Bacardi Cup for the International Star Class at Key Biscayne, Florida today.  After just three races the scoreboard is already featuring a discard and is now showing our Olympic duo lying in second place overall on 5 points.  Speaking with a very proud father, Anthony also in Miami,  tonight, he said it had been very breezy this week but getting somewhat calmer now.  On Monday there was a a 25 degree windshift on the first beat and the Cork pair rounded mark one in joint 29th with both making a good comeback.

In today’s race Peter and David were in second  position with Nin and Rodney in fourth. Breathtaking was the word used to describe this.  Peter got to first and Nin to fifth, incredible for a sailor who had never sailed a Star before this regatta.  Race two was a lot tougher though both had opportunities to be three to four places better.

At this stage they are half way through the regatta  and  Peter and David are in with a good chance.  Tomorrow will be a big day with two more races scheduled. Fingers crossed!