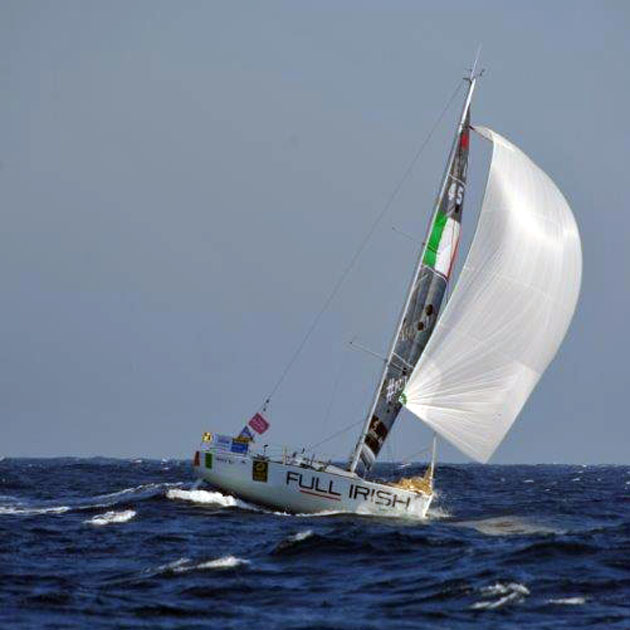 Pic taken from a support boat  showing David Kenefick in over 20 knots of breeze.

Royal Cork Rookie  Figaro Sailor  22 year old David Kenefick has safely got through the first leg of the Solitaire  du Figaro having completed the 536 mile grueling sail from Bordeaux to Porto in a time of three days, seven hours, 30 minutes and 55 seconds to finish in  33rd position. At Cap Finesterre he sailed with the big kite up, hand steering and sailing on the edge for seven hours.  He is in good form, the boat has not sustained any damage and all his sails are fine with no wraps or blowouts.  After sleep and rest he will be ready for the next stage from Porto to Gijón a distance of 452 miles.

Very interesting call tonight from Neil Kenefick, father of David. He was reporting on David’s progress after a somewhat difficult start when he was entangled in two trees in the river that had been warned about.  He is fighting back strongly as we had already observed from the tracker where at times he was showing an excellent speed of 10.2 knots At one stage the tracker was looking like a compression of the fleet with the back markers having caught up with the leaders and effectively maing it a re-start and is currently showing in 23rd position and ahead of Desjoyeaux. 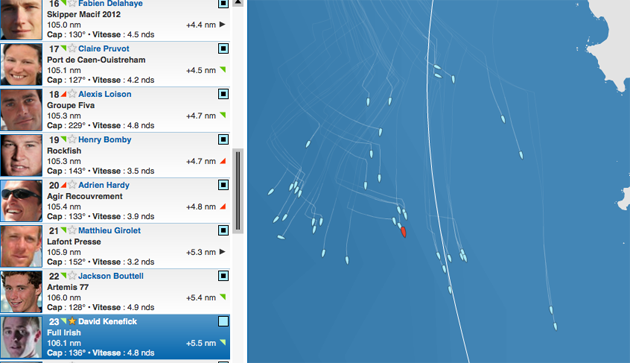 It’s been an interesting few hours for David and he has managed to put himself in a fair position lining up for the last 100 or so miles to Porto. The fleet is approaching the centre of the depression and speeds have dropped right back to just 4-5 knots. This is all as forecast but the decisions and positioning now are crucial for the final part of the leg and the question is whither now East or West?

He is managing his sleeping periods as well as he can,is taking 10 minute naps, and your scribe understands rom his father that his alarm to wake him could be heard from The Royal Cork Yacht Club over in Currabinny!!!

He is a very brave young man undertaking this gargantuan voyage at such a young age and we are following him with intense interest and willing him on his way.

Glorius Glandore
It was as a Thursday night should be!!