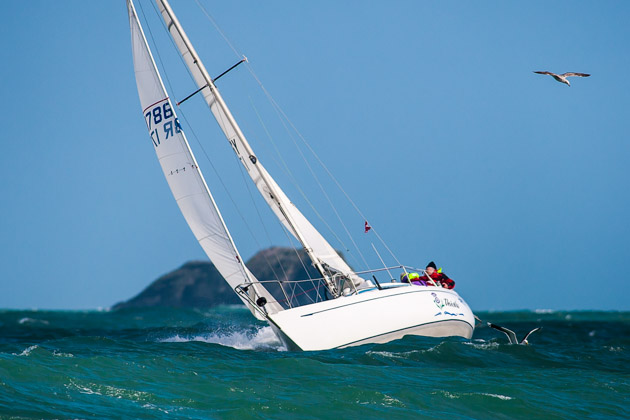 A mild day added to a 15 to 20 knot breeze from the West in a blue sea under blue skies, what more could racing yachts ask for.  It provided the spinnaker fleets with great racing with two races on windward/leeward courses and organized in such a way that classes Zero, One and Two sailed longer courses but were able to finish at approximately the same time as Classes Three and Four thus enabling the second race to get under way promptly.  Indeed the White Sail fleet which started in off Charlelsfort had a stonking good course which blew away the cobwebs after the long winter recess.  The fleet totalled thirty one boats ,ten of which  came from the Royal  Cork Yacht Club joined and three from Waterford Harbour Sailing Club.

In Class Zero Freya and Meridian were, as usual, at it hammer and tongs but it was the wily John Godkin sailing Godot got the best of the results in both IRC and ECHO.  However Tom Roche’s Meridian, is on equal points with Godot in ECHO.

In Class One Rob McConnell’s Fool’s Gold leads in ECHO  and is on equal points with  the Broderick and Gibbons Joker while in IRC  Dan Buckley’s Justus  had two wins. In IRC Three another Waterford boat,  Dave Marchant’s Flyover had two wins in  while Kieran O;Connell RCYC sailing Bandit had two seconds.