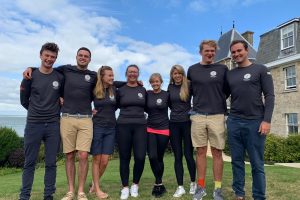 The Royal Cork finished in fifth place at the second annual Global Team Race Regatta in Cowes this weekend, hosted by the Royal Yacht Squadron, from the 25th to 28th of September.

Twelve teams from as far afield as Australia, India, Argentina, California and Japan fought hard in the toughest conditions the Solent could challenge them to. Winds rarely abated to less than 20 knots every day, and heavy rain throughout came as a shock to most bar the Irish. The race committee commendably ensured that as many races as possible were sailed in the relative shelter of Osbourne Bay, before abandoning racing as breezes freshened to gale force each day. A full round robin of 66 races was sailed, leaving no time for a finals series as the next gale ripped across the course on Saturday afternoon.