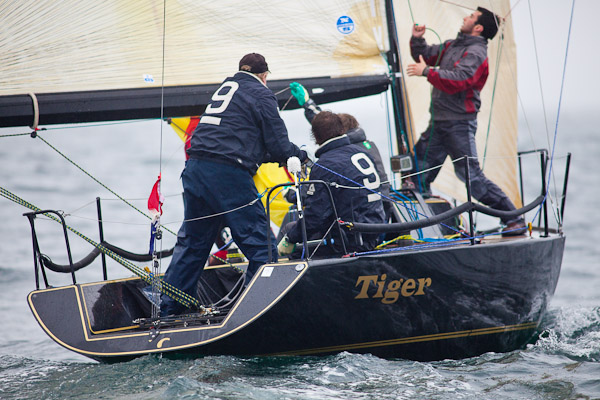 The Kenefick Tiger, the Jacques Faroux designed quarter tonner, will be defending her title again at Cowes next week. Picture Robert Bateman

The eighth edition of the Coutts Quarter Ton Cup revival regatta will be hosted by the Royal Corinthian Yacht Club, Cowes, from Monday, 25 to Wednesday, 27 June 2012. The event will bring together Quarter Tonners from across the UK and Europe to enjoy three days of competitive sailing, camaraderie and fun. These historic little ships hold a very special place in the hearts of many sailors and each year more boats are rescued from neglect and brought back to their former glory by their enthusiastic owners. Owning a Quarter Tonner is a little bit like owning a vintage car and their owners put just as much time, money and love into rebuilding and maintaining them as any classic Bentley or Alvis owner. The original Quarter Ton Cup competition was raced annually from 1967 to 1996 and was the World Championship for small offshore racing boats. Many of today’s top sailors and yacht designers cut their teeth in the class and a lot of the designs were truly unique and revolutionary in their day.

The Irish will be out in force with three new teams and at least one old friend expected to race. The new teams are Paul Coulton’s Cri Cri, a recently refitted 1979 Alain Jezequel design; Jason & Dominic Losty’s Fauroux designed Illes Pitiuses; and Diamund Foley who now owns Espada’s sistership Anchor Challenge. George Kenefick and his team aboard Tiger, the 1989 Fauroux previously known as ASAP, will also be crossing the Irish Sea once again to defend their Corinthian title for all amateur crews. Ken Lawless and Sybil McCormack will compete on Supernova and Eamon Rohan’s and Ian Travers’ Per Elisa will complete the list of Irish entries for the Corinthian Trophy that was first awarded in 2011 and is expected to be hotly contested this year.

Joining the Coutts Quarter Ton Cup revival fleet for the first time this year will be Peter Morton’s new boat Bullit, a Fauroux design from 1977 which won the 1979 and 1980 Quarter Ton Cups and has just been completely refitted. Morty’s crew will include the infamous Kelvin Rawlings, without whom the Coutts Quarter Ton Cup would not be complete, and Jules Salter who loves the event so much that he will fly in specially from the Lorient stop-over of the Volvo Ocean Race, in which he is currently racing aboard Abu Dhabi Ocean Racing. Also keen for a crack at the trophy will be Rickard Melander from Sweden sailing the 1990 Phil Morrison designed Alice II. Stalwarts of the Coutts Quarter Ton Cup, Rick and his crew have been gradually improving their performance each year and, having just won the Quarter Ton Class at the Vice Admiral’s Cup, clearly have their sights firmly set on the main event. Other regulars will include Graydon Dawson’s Diamond, Willy McNeil and Mike Pascall’s Illegal Immigrant, Ian and Catrina Southworth’s Whiskers, Menace owned by Derek and James Moreland and Tim Rees, Paul Treliving’s Odd Job and Paul Kelsey’s Runaway Bus.

Past ISAF Vice Chairman George Andreadis will also be returning to the Quarter Ton Fleet for the first time in 21 years with Atalanti IV, the boat he had built by Jeremy Rogers to Rob Humphries’ design for the 1991 Quarter Ton Cup where she finished sixth. Atalanti IV has been in George’s famous yacht storage facility ever since the end of the 1991 Cup, but she returns to the water this summer looking absolutely stunning following a full refit. Having just come second in the Quarter Ton Class at the 2012 Vice Admiral’s Cup, George will no doubt be hoping for a podium finish in the Coutts Quarter Ton Cup too.

Class regular Rob Gray also has a new boat this season in the shape of Black Fun, a 1976 Laurie Davidson design which won the ’76 New Zealand Quarter Ton Championship with four straight wins and the event will also welcome Freres Sur Mer, a 1981 Fauroux design from the Netherlands.