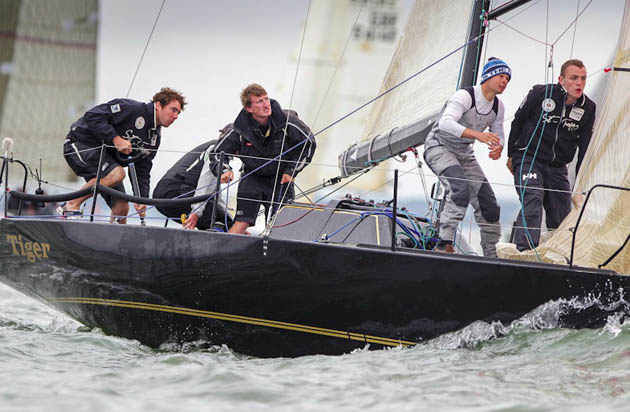 Tiger and her youthful crew in full flight on Day Three of the Coutts Quarter Ton Cup at Cowes. Picture Paul Wyeth

As close finishes go, the final day of the Coutts Quarter Ton Cup 2012 yesterday (wed) was certainly up there with the best of them. Going into the day Peter “Morty” Morton’s 1978 Fauroux had a three-point lead over Sam Laidlaw’s 1990 Vrolick designed Aquila, being helmed today by John Greenwood. Diarmuid Foley’s Anchor Challenge, a 1978 Farr design helmed by Paul Gibbons, was six points back in third on 40 points with Alice II, Rickard Melander’s 1990 Morrison, lying in fourth on 49. The first race of the day, the seventh of the nine race series, saw the discard come into play and with several of the top boats counting a black flag disqualification from race six there was plenty of room for manoeuvre in the final rankings.

Race Officer Rob Lamb and his Committee, the core of which will be officiating on the RSX course at the Olympic Regatta in Weymouth, did an excellent job to complete the final three races scheduled despite very variable breeze. The unpredictable wind and a strong tide gave the sailors plenty to think about and ensured the fleet was constantly shuffling places with surprises and dramas at every turn.

Race seven set the tone of high drama when a number of teams misjudged the strength of the tide, resulting in a series of mark one pileups. After that the day just got more and more exciting with some of the closest racing you could hope to see anywhere in the world.

Despite being one of the boats caught up in the race seven mark rounding debacle, ultimately Peter Morton and his crew claimed a record third Coutts Quarter Ton Cup win by just 4 points from Alice II with Aguila third and Anchor Challenge fourth. This achievement was impressive not only because it was the first time the event has been won by the same person three times but also because Peter and his team have used three different boats for their wins.

In the Corinthian Division for the all-amateur crews Irish Young Sailor of the Year our own George Kenefick sailed Tiger, the 1989 Fauroux design he owns jointly with his father Neil, to victory ahead of Sergeant Pepper, Richard and Anne Thomas’s Bolero, which was designed by Richard’s father David. Third place went to Paul Kelsey’s Runaway Bus, a 1977 Whiting design, with Love In A Mist, a 1974 Waarschip owned by Eric and Philip Williams – the oldest boat in the regatta – fourth.

A look around the crews is revealing too as the fleet without doubt attracts some of the best sailors in the world. Not for big money, but because they want to sail with their friends and they too love Quarter Tonners. This year’s rogues gallery included the likes of World Match Racing Champion Ian Williams, America’s Cup veterans Don McCracken, Dave Scott, Ethan Bixby, British Olympians Stuart Childerley and Andy Beadsworth, David Howlett, Kelvin Rawlings, Jason Carrington, Ian Southworth, David Bedford, John Greenwood, Mike Budd, John Brinkers, and of course our own Irish Olympian Mark Mansfield.

Great credit must go to all six Irish Quarter ton entrants including those not mentioned so far in this report, especially Ian Travers/Eamon Rohan who had two wins in their first outing in Per Elisa and the other Cork harbour quarter tonner Dominic and Jason Lostys’ Illes Pitiuses who also had a great regatta on their first outing.

It’s great to have these four hot quarter tonners in the region and we are all looking forward to exciting and exhilarating racing from them at future events.

Well done to all.