The November Frostbite Series and Bill Jones Memorial Trophy came to a conclusion this afternoon with two races completed by PRO David O’Brien and his team – Celine McGrath and Stephen O’Shaughnessy.  The morning started with very light breeze but filled in and the sailors had 8 – 13 knots on the Curlane Bank with an ebbing tide.

Caoimhe Foster caused an upset to Chris Bateman’s string of series bullets in the first race, however, Chris returned to his winning ways in the second race of the day to secure 1st Place in the Radial Fleet.  Caoimhe Foster was 2nd and Conor Walsh 3rd.

In the 4.7 Fleet – only 3 points separated the top two going into the final day and Atlee Kohl held his three point lead by securing a first and third.  Conor Horgan kept his 2nd overall and Tom Good from Kinsale Yacht Club came 3rd.

This is the first year that there have been Topper 4.2 rigs racing in the Frostbites.  Well done to Joe O’Sullivan 1st, Fearghal Desmond 2nd and Vicky McDonnell Lettice 3rd.

The Topper 5.3 Rigs were the largest fleet competing in the Frostbites and it was great to see a strong fleet join us from Kinsale.  In the Silver Fleet another win for the Foster house with Cillian Foster taking home 1st, Oisin MacSweeney 2nd and Neil O’Leary 3rd.  In Gold Fleet – Jonathan O’Shaughnessy finished with a five point lead to come 1st, Dorothy Matthews 2nd and David Jones 3rd.

The prize giving was held in the Upstairs Bar directly after the sailors had some hot chocolate and thawed out!.  Stephen O’Shaughnessy thanked all the sailors with particular mention to the visiting sailors from Kinsale Yacht Club.  He thanked Annamarie Fegan outgoing Laser Class Captain for all her work over the past two years.

Brian Jones on behalf of the Junior Dinghy Committee thanked Stephen for championing Junior Sailing and all dinghy classes over the past two years as Rear Admiral and wished him all the best in his upcoming retirement!. 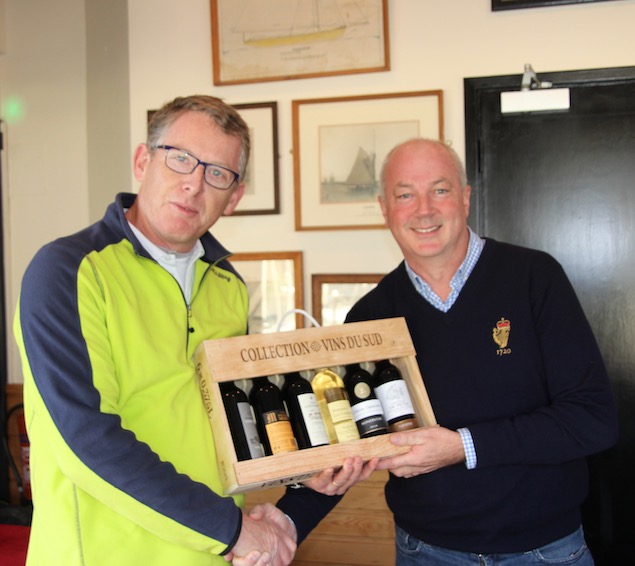 In case you missed the prize giving this afternoon – thank you to all the parents who assisted both on and off the water during the month.  Diarmuid Lynch is the incoming Topper Class Captain and I wish him every success.