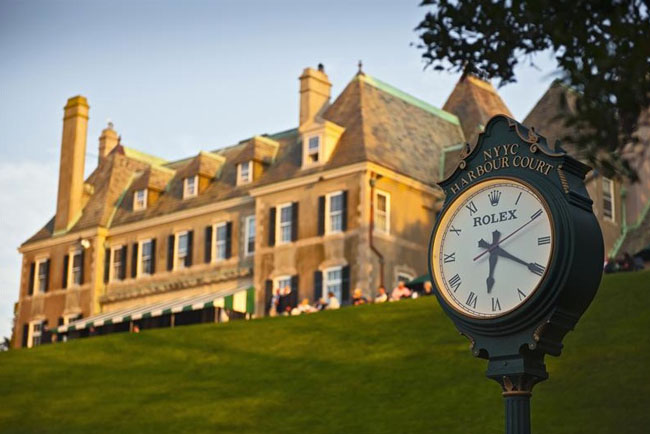 When a global fleet takes to the waters of Narragansett Bay and Rhode Island Sound on tomorrow Tuesday, 10 September, it will mark the start of the third biennial New York Yacht Club Invitational Cup presented by Rolex.  This unique sailing event, which promotes true Corinthian sporting spirit – a concept valued highly by Rolex – is a tough, demanding competition on a level playing field.  The regatta is open to a limited number of the world’s pre-eminent yacht clubs with crew composition strictly limited to non-professional sailors.  The 20 teams will race identically tuned one-design Swan 42s and the 2013 regatta promises to be another test of ability and tactical expertise.

The fleet is made up of host club the New York Yacht Club (NYYC), 2011 defending champion the Royal Canadian Yacht Club, 15 invited international clubs, and three American yacht clubs determined by a qualification series.  All teams are instilled with fierce patriotism and the competitive skills displayed by the sailors are testament to the high regard in which the trophy is held.

Among the clubs returning to the fray is the Royal Yacht Squadron (RYS), one of three British clubs alongside Royal Thames Yacht Club and the Royal Southern Yacht Club (the latter of which is competing in the event for the first time). “I am delighted to be returning to Newport,” acknowledged Glynn Williams helm of the RYS entry for a second consecutive time.  “It’s hard to find a comparison for the Invitational Cup as this event offers so much for the competitors.”  Williams enjoys the opportunity to compete against other world-renowned yacht clubs and the tremendous atmosphere prevalent at NYYC’s Harbour Court during the event.

Eight additional teams are participating in the Invitational Cup for the first time, including Royal Swedish Yacht Club (KSSS).  Team Captain Douglas Eklund is sanguine in his assessment of the racing ahead: “We know there are highly competent teams.  We know that the races are tight and we have made great efforts to learn more about the sailing waters.  We know how important teamwork is.”  Eklund and his compatriots are honoured to be present: “Newport is an historic place and this is a unique opportunity for us to be a part of [that].”

Two clubs making a third consecutive appearance, and each hoping to convert their experience into victory are the Royal Cork Yacht Club (RCYC) and Real Club Nautico de Barcelona (RCNB).  Anthony O’Leary is leading the Irish team: “Good old-fashioned one-design skill and teamwork are of paramount importance at this event.”

Four teams will be flying the Stars and Stripes of the United States. The host, New York Yacht Club, and the teams that emerged from a Qualifying Series that rewarded the top-three finishers with an invitation to the biennial main event.  Larchmont, Seattle and San Francisco Yacht Clubs took the treasured places from a fleet of 24 teams.  Shawn Bennett, helm for The San Francisco Yacht Club, accepts the event is a mental puzzle and an emotional and physical marathon: “We have heard about the incredible hospitality and great shore side events, and know to expect to be competing against some of the best amateur sailors in the world.”