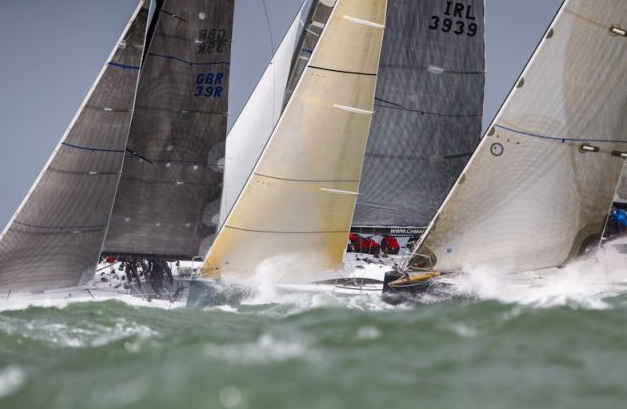 Changed conditions on the final day of racing today shuffled the pack but Antix consistently kept her second placing.  However, the winner was Andrew Pearce’s Ker 40 Magnum 111 while in third place was the Mathieu Goubau First 47.7 Moane.   Relegated to fifth place carrying a ninth in one of  today’s three races was Piet Vroons Tonnerre de Breskens on equal points with Mike Bartholomew’s  Ker 39 Tokoloshe who finished sixth.  Both these boats will be competing at Cork Week.  Conor Phelan’s Jump Juice finished in eighth position.

Ballistic conditions in the Eastern Solent provided an extraordinary combat zone for the second day of the RORC IRC National Championship. With 25 knots of wind gusting up to a full gale, pulses were racing, the conditions were such that many yachts chose not to hoist spinnakers downwind and storm sails and lifejackets were deployed in the lively conditions.

Mike Bartholomew’s King 40, Tokoloshe, corrected out to win today’s race in IRC One. Tokoloshe handled the conditions better than most, making a big gain on the first beat by using the lift off the island shore. After a textbook kite hoist, the South African boat handled the feisty conditions with some ease until a vicious gust knocked them into a spin, tearing their spinnaker in half.

Piet Vroon’s Ker 46, Tonnerre de Breskens, was second today, retaining the lead in the big boat class for the series. As Tonnerre came round the top mark, the Dutch flier hoisted their spinnaker, pulling the trigger downwind at over 20 knots. The sleigh ride did not last too long, after burying the bow Tonnerre went `down the mine’ for a spectacular wipe-out.

François Goubau’s First 47.7, Moana, was one of the few yachts to reef their mainsail today and showed impressive upwind performance to take third place in IRC One from Anthony O’Leary’s Antix by just 13 seconds.

Tomorrow will be the last day of racing at the RORC IRC National Championship and all classes are still wide open. The weather forecast is for a more moderate breeze of between 10-15 knots, which should provide more of a tactical test after a two day masterclass in the black art of heavy weather sailing.

“In those conditions, you keep your eyes on the road!!” quote from Anthony O’Leary at British IRC National Championships today
Crosshaven Schools Sailing Programme