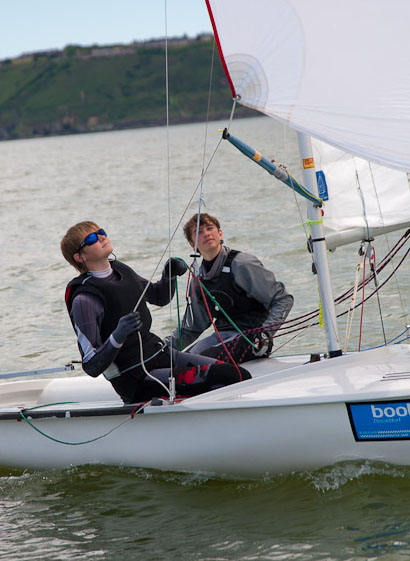 The Four Star Pizza  Youth Sailing World Championship got off to a tricky start for the 350 crews of 14-19 year olds from 63 nations today. Dublin Bay threw up a mix of light to moderate winds, with shifts and gusts as clouds passed over, while allowing the occasional glimpse of sunshine through.

The stand-out opening day performance among the Irish teams competing came from Royal  Cork’s Patrick Crosbie and Grattan Roberts in the 420 Boy’s class, who lie third overall in what is their first World Championship. They are 11 points adrift of the French leaders Guillaume Pirouelle and Valentin Sipan after posting a 15-2 score in today’s two races.

“It was pretty good – better than we expected,” said Crosbie, aged 15. In today’s second race they had managed to get into second on the first upwind leg. “It is hard to tell,” Crosbie admitted of where he expected them to be at this early stage of the regatta. “We didn’t know a lot of the boats or what the level was. We are very happy today.”

Conditions tomorrw (Sun) are expected to produce more wind from the west.