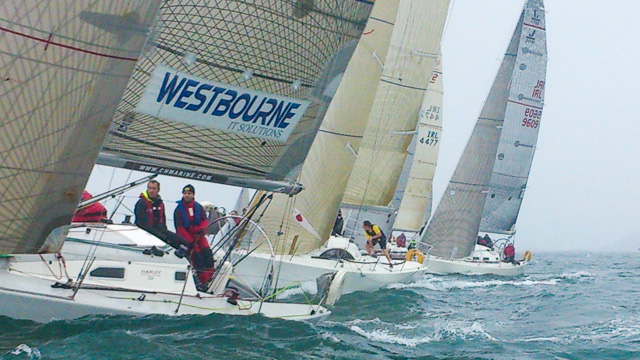 A mild, misty and damp day greeted the competitors on arrival in Crosshaven  today for the second day of the CH Marine Autumn League.  Classes one, two and three were brought outside the harbour to sail two windward/leeward courses.  The 1720s joined classes Four and Whitesail IRC and ECHO.  They sailed off the eastern bank at Cuskinny 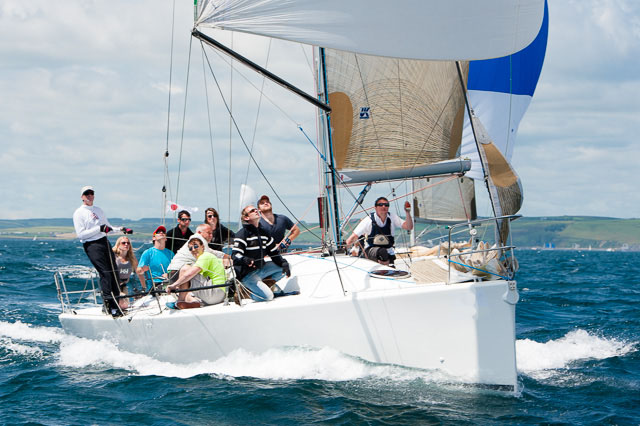 In Class 2 IRC the other WHSC Boat, Shane Statham’s Slack Alice, having won both races last week could only manage a fifth and a third today and is lying behind the Desmond/Ivers/Deasy Bad Company.  Ian Hickey’s Cavatina is in third place and could look to be quite dangerous if he can discard his retiral from last week’s race.

In Class 3 Kieran Collins in Tambourine is working out a good lead from the Kieran O’Connell/Graham Maron’s Bandit.  David Marchant in Flyover, another competitor from Waterford, is lying third.  In this class Padraig O’Donovan is sailing Chameleon single handedly and has some difficulty with his rigging and David Doyle’s Bedlam from Cobh got into a bit of a pickle when his spinnaker halyard jammed in the first race of the day.

Returning to the inner harbour fleet there was some alarm created in Whitesail  when a lady crew member on Tom McCarthy’s Ashanta went overboard but was  picked up by Dan Murphy, Southern Star, who was granted redress in the situation. In Whitesail Michael Wallace leads in both ECHO and IRC.

In Class 4 Alan Mulcahy won IRC with Michael Murphy second and the positions were reversed in ECHO.

In the Sigma Class David Marchant’s Flyover is lying on five points while Clem and Wendy McElligott are following them on nine points.

Racing will resume next Sunday  with FG at 11.55am.