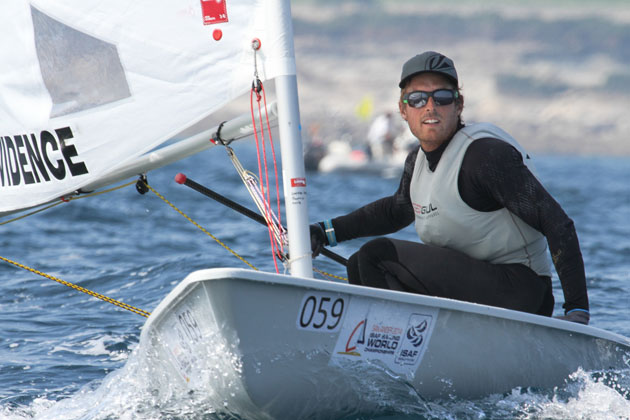 James Espey in action on Day One of the ISAF sailiing world championships at Santander. Pic ISAF

Ten days of action packed racing commenced in Spain today (12 September) at the ISAF Sailing World Championships; the peak event for high performance sailing since the London Olympics. The thick fog that covered the harbour in Santander at the start of the day soon burnt off and gave way to a light 5 to 7 knot breeze from the north east allowing the Laser and Laser Radial Fleets to get afloat and start the Santander 2014 ISAF Sailing World Championships.

First up to represent Ireland were James Espey and Finn Lynch who are both competing in the Laser Standard class of 150 sailors. The fleet has been separated based on world rankings into three groups; Blue, Yellow and Red. Both Irish men are sailing in the Blue fleet until Sunday (14 Sept) when they will split to Gold, Silver and Bronze based on the initial results.

Race 1 began at 14.25 CEST. James Espey got off to a strong start leading the top of the fleet alongside the UK’s Nick Thompson. He fought hard but slipped a few places to finish 6th with Thompson taking the win. 18 year old Finn Lynch, who is current U19 World Champion, finished a notable 27th in this very senior and experienced class. Espey finished 16th in Race 2 to move him to 26th overall while Lynch followed his 27th with a 43rd and lies 109th.

The 120 boat Women’s Laser Radial Fleet is split into two groups of 60, each scoring points from 1 to 60. In this size fleet a good start is critical especially as the right hand side of the course was favoured and in the lighter conditions boat speeds are similar. Those sailors that were able to put together two single figure results were guaranteed a place in the top ten. Annalise Murphy got off to a slow start finishing 37th in her first race. She followed that with a 44th in Race 2 leaving her 86th overall from the 120 boat Laser Radial class. The Laser Radial fleet will also be split by Sunday into Gold, silver and Bronze.

Racing continues until the 18th September for both Laser classes.