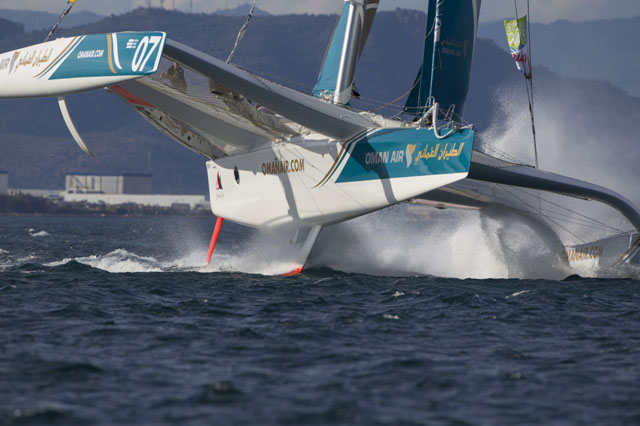 With just three days to go to the start of the 11th edition of the Transat Jacques Vabre on Sunday, Oman Air-Musandam co skippers Sidney Gavignet (FRA) and Damian Foxall (IRL) are keen to get going!

“The atmosphere in the Transat Jacques Vabre village has been incredible all week, thousands of people have come out to look at the boats and visit our “Discover Oman” tent and there will be even more people over the weekend,” said skipper Sidney Gavignet who has paired up with an old friend and rival in Ireland’s greatest offshore sailor, Damian Foxall, for this edition of the great French classic.

“We managed to go for a sail on Tuesday which helped us to stay focused. It is good to get cold and wet at least once in the week leading up to the start – we are really looking forward to getting started,” he added – speaking at the Oman Air-Musandam press conference on Thursday morning.

“We have had superb support from our sponsors Oman Air and Oman’s Ministry of Tourism and the whole team during our preparations, in particular Fahad Al Hasni, our best Omani MOD70 sailor who has been shadowing us and supporting us in order to learn as much as possible about two-handed sailing with a view to one day sailing his own campaign and also in order to take his experience back to Oman to continue to inspire the next generation of sailors,” he added.

Sunday’s start is a 40 nautical mile prologue for the MOD70 fleet of two, so Oman Air-Musandam, Edmond de Rothschild and the Multi50 fleet will return to the dock in Le Havre after the IMOCA 60s and the Class 40s have crossed the start line – destination Itajai, Brasil, 5,450nm across the Atlantic Ocean.

The official multihull start is scheduled for later the following week depending on the weather – the goal being to try and group all four classes’ arrival at the finish.

Between them, the two sailors have raced 38 transatlantics and seven Volvo Ocean Races, including a win each – with ABN AMRO for Sidney in 2005-06 and with Groupama for Damian in 2011-12. Both are candid in saying that racing the 70ft MOD trimaran across the ocean two-handed is going to be one of the biggest challenges of their careers: “Racing two-handed is tough, very tough and this race has turned into more of a match race between Edmond de Rothschild and ourselves. It will be a question of balancing strategy with tactics and in basic terms keeping a very close eye on the competition,” said Damian.

“Sidney and I are both very familiar with our rivals in the MOD class and they with us, we all have very similar backgrounds so it will be very important to get the weather routing right and to maintain our energy levels.”

For the first time, weather routing is permitted on the TJV for the two MOD70 crews which means the three hour watches, with a 50 minute crossover each time, will be spent mainly on deck rather than down below at the chart table.

“We could get two good hours of sleep at one time if we are lucky but the great thing about weather routing is we will be able to keep track of the boats ahead and have a pretty good idea of what weather is to come,” said Gavignet.

“The shore-based weather routing will be a critical part of the race,” added Foxall.

Gavignet and Foxall are sure of a warm send off from Le Havre, not just by the hundreds of thousands of French spectators who will visit the race village in the run up to the start but also by Her Excellency the Undersecretary of Oman’s Ministry of Tourism and Chairwoman of Oman Sail, Maitha Al Mahrouqi, who is flying in to lend her support to the campaign.

Her presence demonstrates the importance of France to Oman’s tourism market (there is a direct Oman Air flight from Paris to Muscat) and during her stay she will visit the popular “Discover Oman” Exhibition set up in the race village. The exhibition was last in France at Roscoff at the end of the Route des Princes in June and proved a big hit before it travelled to Cowes in England where Oman Air-Musandam competed in the Artemis Challenge in August and the Rolex Fastnet Race, winning the MOCRA class.