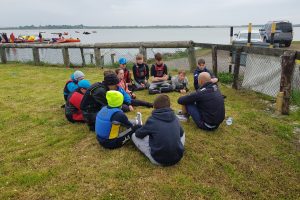 Having put down a breezy 2017 season, a long hard winter and then a tough Trials, the weather finally became seasonal for the first regional event of 2018. 25 boats made the journey to Malahide, where MYC hosted the Ulsters on the fabulous Broadmeadows estuary.

Saturday’s 10-12 knots and warm sunshine meant the PRO got 4 races away.  With similar conditions on Sunday, only 2 races were needed to complete the series so we were able to get on the road home early.

However, these lighter conditions didn’t seem to suit the Royal Cork sailors in terms of the results. James Dwyer Matthews was the only club sailor to make the Senior top 10, finishing 7th. Harry Twomey was next placed in 11th. A BFD in his otherwise top 10 scores meant that Justin Lucas came in 15th.  Michael Crosbie lead a bunch of Royal Cork sailors home in 18th place, immediately followed by Richard McSweeney, Patrick Bruen, Eoin Horgan, then a jump to James Murphy in 23rd and another jump to Simon Pritchard in 25th. Anna Keal (our only girl in Senior Fleet) came through in 30th, immediately ahead of George O’Keeffe. Darragh Collins finished 38th and well done to Liam Duggan, making his Main Fleet debut in Senior fleet (always a very big step up) in 52nd.  A special shout out to Richard McSweeney, however, who picked up a special sportsmanship award. Richard retrieved a sprit which had fallen from Conor Gorman’s boat and carried it to the finish. Not only that, it brushed off a mark and he ended up doing turns! Well done Richard.

We had a stronger Top 10 showing in Juniors, with Alana Twomey leading the charge in 4th, sailing very consistently. Emmet Lucas was close behind in 7th. Ben O’Shaughnessy rounded out the top 10, and was unlucky to count a poor score due to a capsize, having used his discard on an earlier BFD. Rian Collins finished in 11th counting 3 top 10 finishes. David McSweeney was next best in 15th, with George Pritchard just behind him in 17th, counting some big scores (DSQ & DNF). Harvey Matthews had a great start to his Main fleet career in 18th with Harry Moynan a few places back in 23rd. We then had another 3 debuts to round out the fleet, Ellen Bruen in 34th, Shane Collins in 36th and Charlie Venner in 37th.

Our Regatta Fleet representation was unusually light this event, with only Daniel Horgan making the trip and finishing 9th, having had loads of fun and a few capsizes along the way! It would be great to see more of our younger sailors make the trip to these events, where they will make loads of new friends for life.

Thanks to Ruth and Andrew for towing the club rib and club trailer.  Our next big event is the Coolmore to Club on Friday 1 June, and keep an eye out for the Skills for Gold programme which is also coming in June.