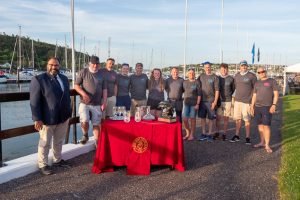 By Communications on June 15, 2021 in Keelboats, Latest

The Weather Gods were smiling on the Royal Cork Yacht Club on Monday evening as members gave a triumphant welcome home to the Murphy family’s Nieulargo, the overall winner of last week’s Dun Laoghaire Dingle Race.

Denis and Annamarie Murphy’s successful Grand Soleil 44, was the winner of the 2020 inaugural Fastnet 450 Race (from Dun Laoghaire to Cork) and this year adds the D2D title.

Admiral Colin Morehead welcomed the victorious boat and crew back to the club with a special Royal Cork five gun salute and a reception on the lawn at Crosshaven, in accordance with the club’s ancient rules as Afloat’s WM Nixon described last Saturday here.

After an epic 14th edition of the D2D that attracted a 38-boat fleet for last Wednesday’s spectacular start on Dublin Bay, the Murphy’s lifted the trophy at Saturday’s prizegiving in Dingle, County Kerry.