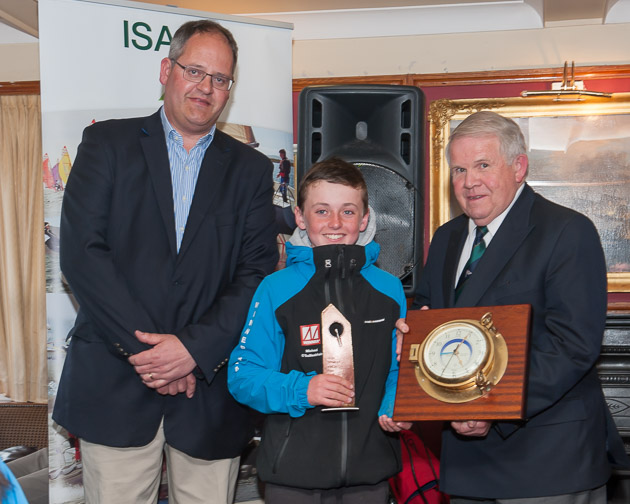 Today (Sunday) turned out to be a miserable morning with winds gusting 30 knots at Roches Point and resulted in Principal Race Officer Peter Crowley cancelling all racing for the four ISA Pathway National Classes. Consequently, prize giving for these fleets was moved forward to 1.30 pm and facilitated an early journey home for the competitors.

In the Topper Class Geoff Power of Waterford Harbour Sailing Club took first place with a four point lead, while Luke McElwaine of Newcastle Yacht Club/ Carlingford Lough Yacht Club came in second, only one point ahead of Tom Keal of Royal Cork Yacht Club in third place. First female Topper sailor was Caoimhe Foster of the host club, who came in fourth overall, only one point behind third place.  The Toppers only managed four races over all in the event due to adverse weather. These results will be part of the basis for choice to compete for the Topper Summer Squad and the final decision on the full squad will be made in the coming weeks.

In the Laser 4.7 class the winning sailor was Henry Higgins of Royal St George Yacht Club and overall second placed sailor and winning female sailor was Rebecca O’Shaughnessey of Royal Cork Yacht Club with third place going to Conor Quinn of Carlingford Lough Yacht Club. This is an indicator event for the 4.7 ISA squad for the summer, along with other event results.

The performance of the Laser Radial girls at this event has to be noted, with five girls in the top ten and Erica Ruigrok of Rush Yacht Club coming in at third place, also giving her the first female result. Conor O’Beirne gave the most consistent performance over the nine races and gained first place.  Second place went to Cian Byrne of Royal Cork Yacht Club who showed good local knowledge of winds and tides and used them to his advantage.

There was an extremely tight battle for first place in the 420s between Douglas Elmes and Colin O’Sullivan, of Royal Cork Yacht Club and Howth Yacht Club, and Peter McCann and Harry Whitaker, also Royal Cork, who took the overall prize.  James McCann also Royal Cork, with Bill Staunton of Skerries Yacht Club as crew, was hot on the tail of his elder brother throughout the event and finished in third place. Lizzy McDowell and Anna O’Regan of Malahide Yacht Club were not far behind and took fourth place and first female position.

Meanwhile, for the Iodai Trials and the anxiously awaiting sailors,  the wind had abated and shifted to the North and enabled racing to commence for the hardy optimists and this was particularly important in that places were up for grabs for the Worlds Team, the European Team and a Development Squad. Two races were sailed giving them a total of thirteen races over the event. 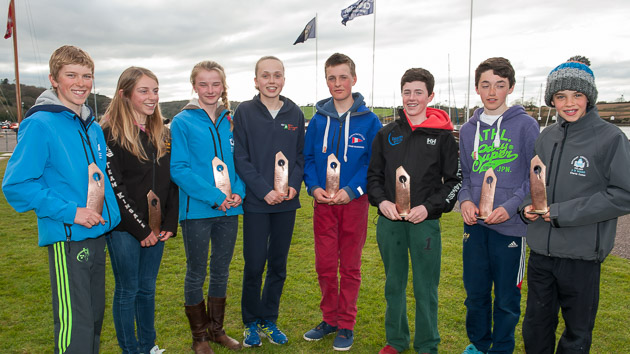 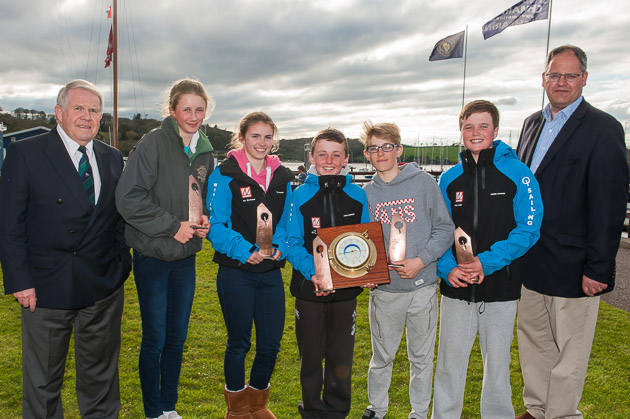 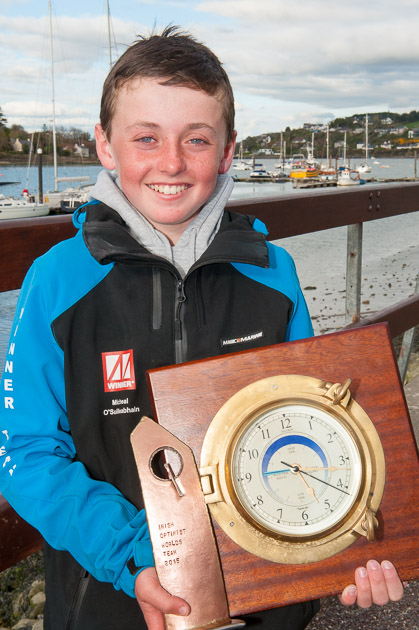 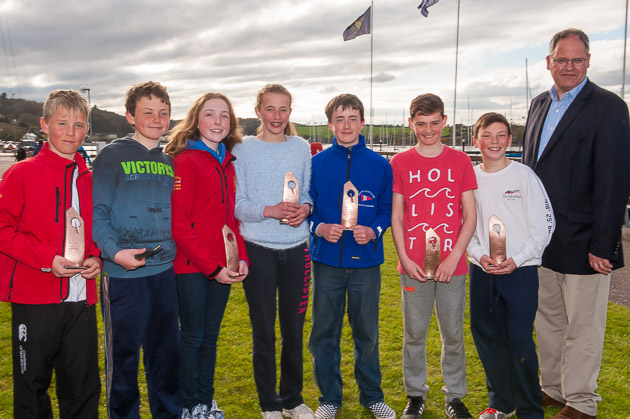 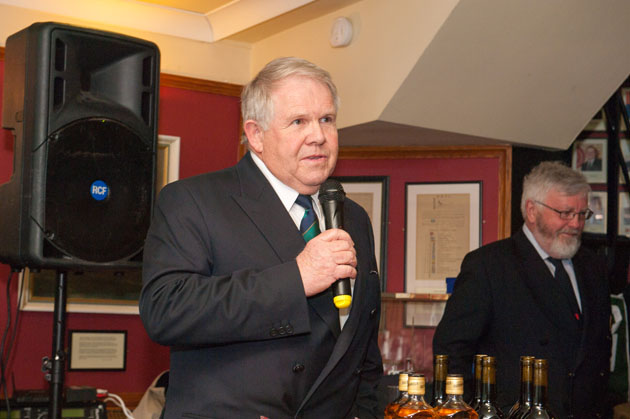 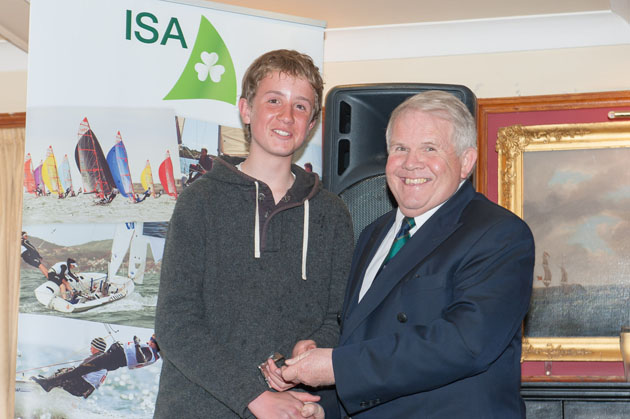 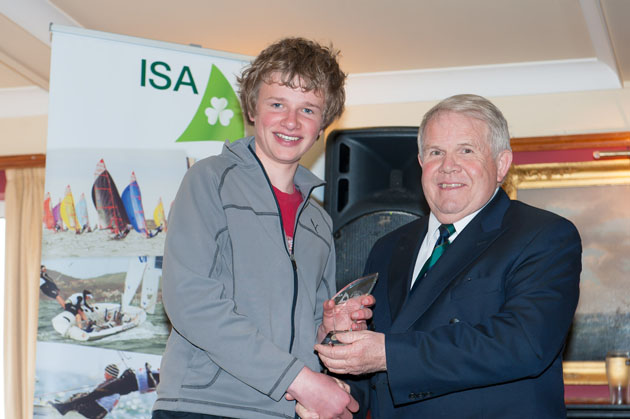 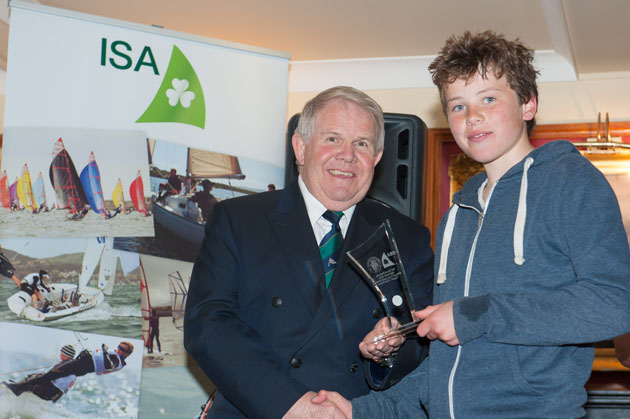 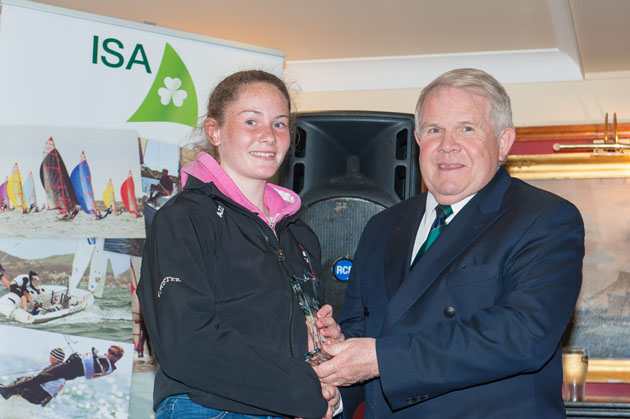 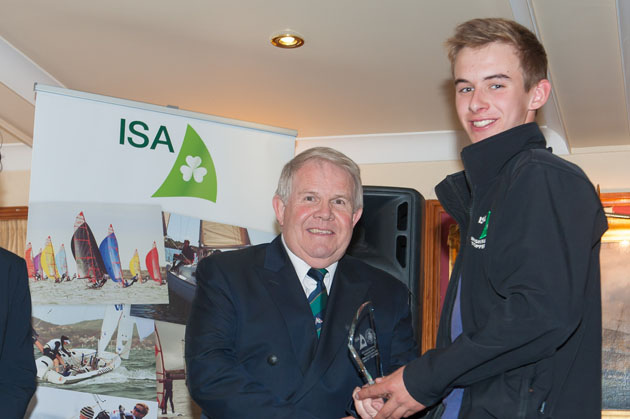 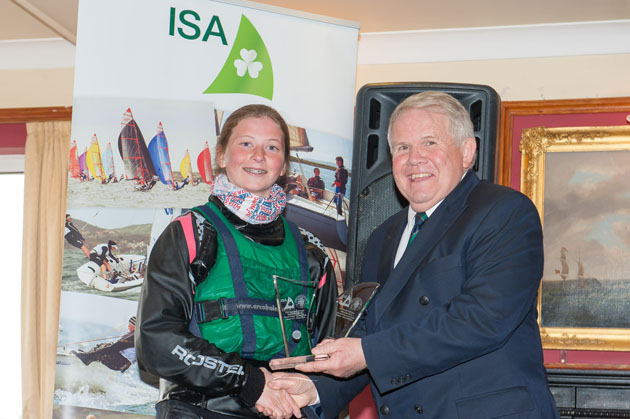 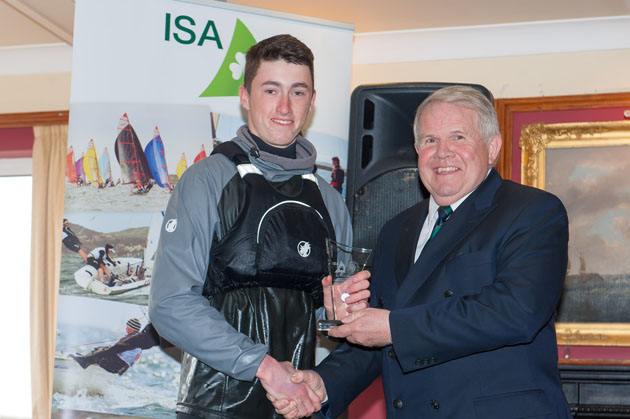 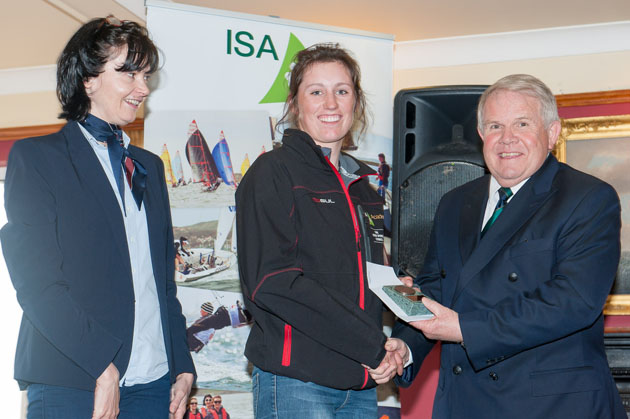 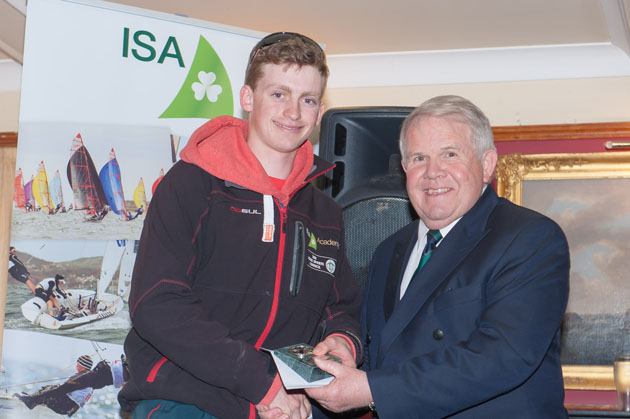 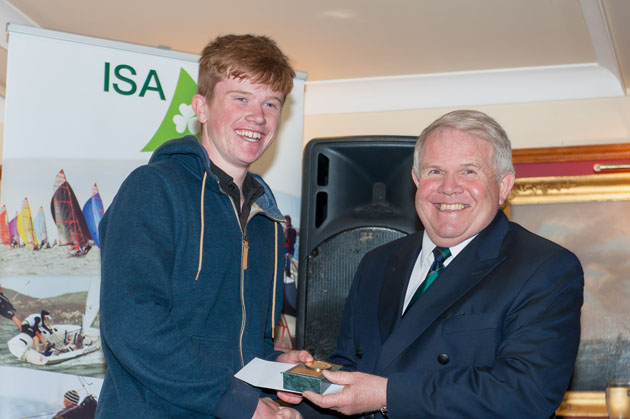 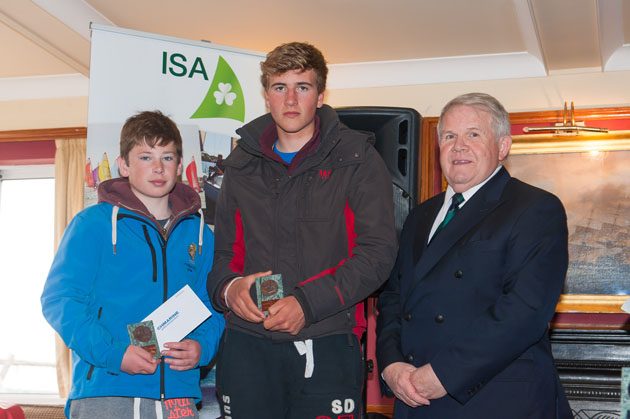 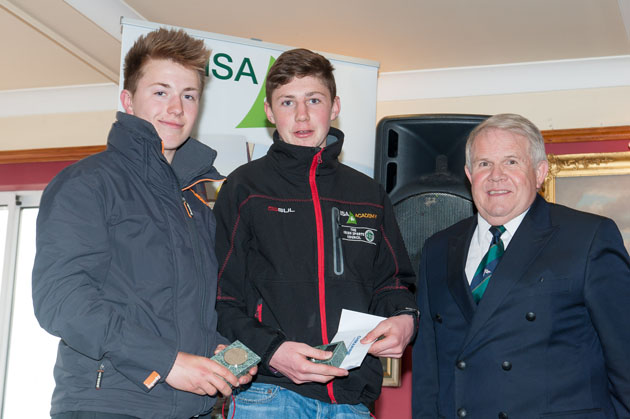 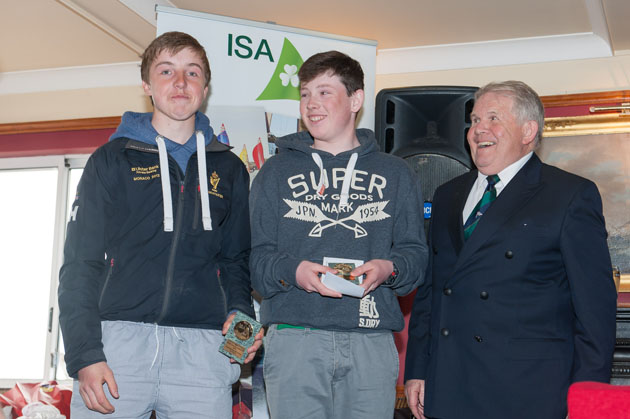 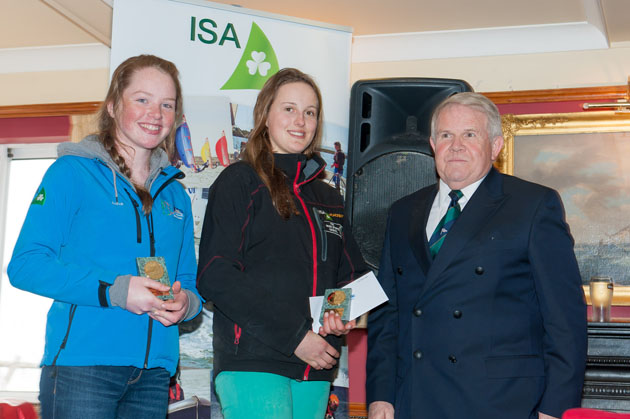 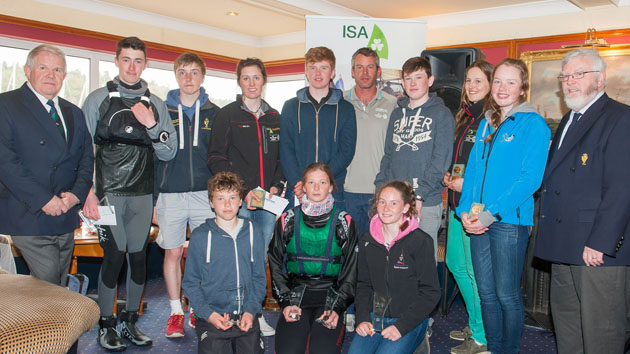