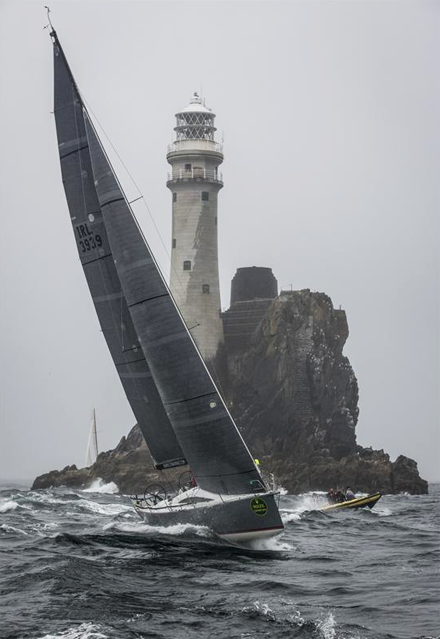 Anthony O’Leary’s Ker 39, Antix, rounded the Fastnet Rock on 13 August at 19:10:54, an emotional moment for the all-Irish crew. From the bow to the stern of the boat, Antix personifies the long history and passion of the Rolex Fastnet Race.

On the bow, 22 year-old Jamie Donegan is the fifth generation of his family to have taken part, Henry Donegan having competed in the first Fastnet Race in 1925, aboard Gull, which was built in 1895. 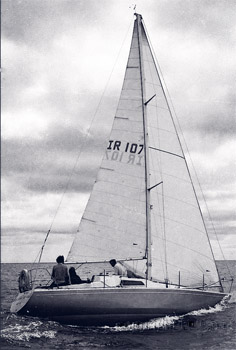 “Henry Donegan was my great great Grandfather and on board was his son, also called Henry; it’s a bit of a family name,” smiled Jamie. “It wasn’t until 1983, that Yellow Scampi raced around the Rock with Jim Donegan and his son Peter on board and I am the fifth generation to take part. I have been on the bow of Antix for the last two years and I have grown up with Anthony O’Leary’s son Robert.

“The Fastnet Rock is so close to my home and it will be hard to turn around and go back, but I intend to do my family proud and enjoy the race and hopefully, this race will be the first of many.”

Jamie Donegan may be the only sailor in the Rolex Fastnet Race to count a five-generation Fastnet affair but Peter and Robert O’Leary are the fourth generation of their family to have competed in the iconic race as their father, and skipper of Antix, Anthony O’Leary, explains.

A marriage of yachting dynasties.

“This will be my first Fastnet since 1977. My wife Sally competed in the notorious 1979 race. She is the daughter of Sir Robin Aisher and by that lineage, Robert and Peter are fourth generation competitors. I proposed to Sally straight after the 1979 race and we have three boys from our marriage but this year is the first time I have taken part in the Fastnet Race with any of them. When we pass the Rock, we will be just 3 miles from Cape Clear and I am sure we will hear the clinking of glasses in Baltimore, as we round the Rock.”

As Antix rounded the Fastnet Rock on Tuesday evening, Sally O’Leary was there, in appalling weather, cheering on her husband, her sons and the proud Irish crew on board. “I didn’t shed a tear but it is a moment I will never forget; watching them in the rain, hiking hard after a 400-mile beat. To be honest I was happy not to be on board.,” observed Sally, as Antix turned back across the Celtic Sea, to finish the 45th edition of the Rolex Fastnet Race.

Antix has three Baltimore Lifeboatmen amongst the crew, who assisted in the rescue of the Rambler 100 crew in the 2011 Rolex Fastnet Race.

From the Rolex Fastnet Race Homepage