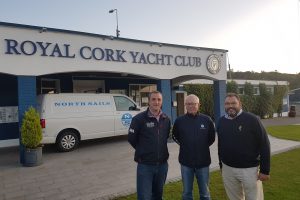 The Royal Cork Yacht Club in partnership with North Sails Ireland are delighted to be running a training initiative that is open to all participants in the CH Marine Autumn Series which commences on Sunday 1st October 2017.

Speaking at the announcement of this innovative addition to the popular CH Marine Autumn Series, Kieran O’Connell, Rear Admiral Racing at the Royal Cork outlined that “The Club has recently applied for a Crew Training Grant from the Irish Cruiser Racing Association (ICRA). Earlier this year at the ICRA annual conference, availability of this grant was announced and it has enabled the Royal Cork to collaborate with North Sails Ireland to run an on the water race training program during the upcoming Autumn Series sponsored by CH Marine”.

Kieran gave a brief outline of the program, “North Sails Ireland working with their Media Partners Isla Media from Cork will be active on the water before and during racing. The aim is to offer trim and set up advice before the start and then once the Flag drops to film the racing and debrief in full in the Club house the same day. The North Sails Team will consist of Nigel Young, Maurice “Prof” O’Connell and newest member Shane Hughes. Nigel and Shane will be in the Ribs and Prof who will be racing on board ‘Jump Juice’ will helping with his “View from the race course” after race analysis”.

Kieran added, “This will be a great addition to this year’s CH Marine Autumn series at the Royal Cork and we would like to thank ICRA for their support and North Sails Ireland for working with us on this exciting new addition to the series”.