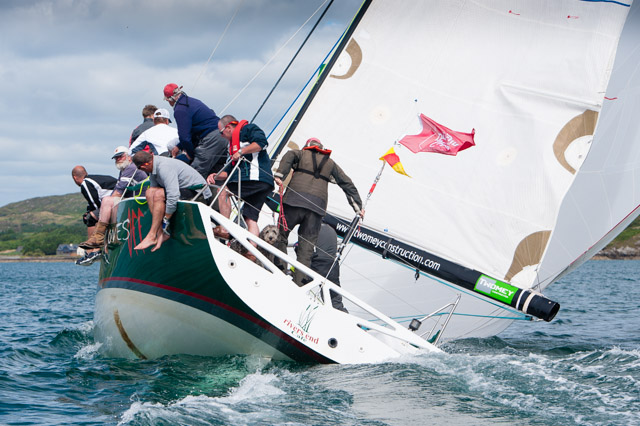 Kieran Twomey’s “Gloves Off” getting ready to drop the kite with regular crew member ‘Daithí’ in the midst of the action.  Photo Robert Bateman

With a good sailing breeze, from the north west, forecast for the last day of sailing in the 2013 Cork Dry Gin Calves Week 2013, Race Officer Neil Prendeville took the opportunity to send the fleets on an unusual triangular course.  A beat from north of the Calf Islands to Goat Island three nautical miles west of Schull Harbour, a fast spinnaker run down the smooth channel inside Goat and Long Islands and a broad reach out and around the Middle and Calf Islands was the setting for some challenging and enjoyable sailing.

The wind, which was light onshore, built to a 17 to 18 knot breeze outside Copper Point, with gusts adding some interest to the spinnaker legs.  Classes 0/1 and 2/3, and the larger Whitesail boats completed the circuit twice,with the smaller boats finishing after the run around the Calves. 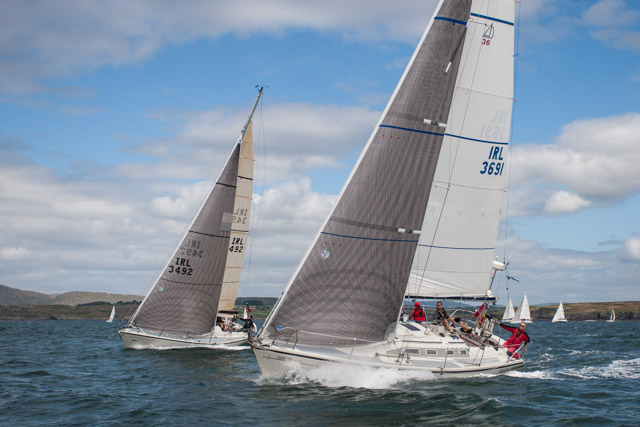 Class 0/1 bunched around the Committee boat at the start with a few caught in the middle of a squeeze, but the fleet separated on the beat to Goat Island with Kieran Twomey in Gloves Off leading the fleet down the sound under spinnaker.  On the spinnaker leg, Dublin’s Paul O’Higgins in Rockabill V, with Kieran Collins on board, enjoyed a successful joust with Rob McConnell’s,  Fool’s Gold with Roy Darrer on board  and with Rockabill V  emerging the winner having luffed Fool’s Gold  before hoisting their spinnaker.

Many boats struggled however to hold their spinnakers in the gusts with a few generous broaches to add to the excitement, which may explain why in the final shakeup Fool’s Gold were ahead of Rockabill V on corrected time in IRC.  Both however fnished behind Kieran Twomey who completed a clean sweep in Class 0/1 IRC for the week.

As usual, the results in ECHO had more variability.  Local skipper Gabby Hogan took the lead again on Growler, ahead of Conor Doyle from Kinsale on Freya and Dave Harte in the Schull Outdoor Education Centre boat, Infinity, helmed by 15 year old Florence Lyden from Baltimore.

In Class 2/3 IRC honours were taken by Derek Dillon on Big Deal ahead of Brian O Sullivan on Amazing Grace and David Buckley from Tralee on Boojum.  Local skipper  Paul Murray won on Full Pelt in ECHO ahead of local rival Frank O’Hara on Chinook and Diarmuid Dineen on Growler (The 32ft. version).

In Class 4, Shelly D won IRC ahead of Saoirse.  Waterford visitor Rene Wubben took the ECHO prize on Seven Whistler, to also win that series.  Whitesail 1 was won by Roche/O’Leary/Andrews helmed by Tom Roche on Act 2, ahead of Ciaran Geogheghan on Fizz in IRC and Morris Mitton on Albineta in ECHO.  Schull skippers James and Deborah Crowley on La Perle Noir won against a fleet of local rivals in Whitesail 2 and finished 9 seconds ahead of Colin Morehead in Giggles.