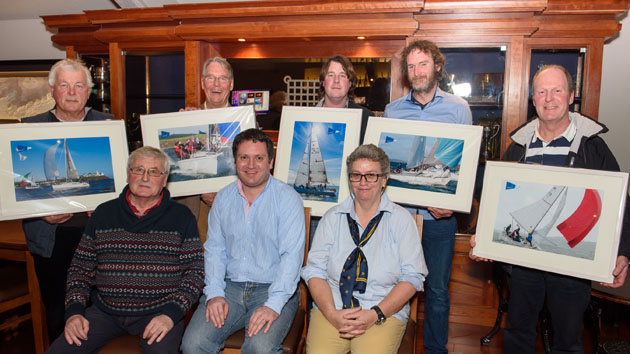 Having received a warm welcome from Caroline Forde, Rear Commodore Membership, Kinsale YC, SCORA Commodore, Ronan Enright, ably assisted by Hon. Sec Michael Murphy, took the attendance through a very comprehensive AGM at Kinsale Yacht Club last Friday evening. While the attendance was indeed very good some people unfortunately had to miss same owing to being absent on the ski slopes etc. and indeed they did miss one of the best SCORA meetings in several years.

The official business of reports, accounts etc. having concluded and there being no band changes to discuss, the meeting went straight into a discussion to find what was expected of SCORA from the members. This unleashed a most lively exchange which quite coincidentally fitted in with the current situation of recruiting new members t o join our sailing ranks throughput the country. Tom MacSweeney set the ball rolling with his views on having a coordinator in each club to help with recruitment and to make sure newcomers would be treated in a most welcoming manner and made to feel at home.. Rob McConnell WHSC made the point that when coming from Belfast to Cobh for the weekend of the Cobh to Blackrock race that the town was thronged with people and he felt sure many of them would have loved to have been on the water had they known how to access a berth on a boat. Michael Murphy of Schull Harbour and Royal Cork explained they have not experienced any fall off in participation in Schull. They are a club without a club house but still manage to attract numbers the envy of many others. On a race morning they simply post details of the course at the local tourist office and a decision at which hostelry the prize giving will take place. This rotates each week so that each hostelry sees the benefit in turn. The whole idea is very simple and there is no regimentation involved. Aidan McAleavy, Commodore,Cove Sailing Club led the discussion that followed as to the number of events being held and this is fragmenting the system. He instanced an occasion where Cove Sailing Club was looking for a space for some half a dozen cruising boats for a fun day but could not obtain same. Commodore Enright made a very valid point that it used to be that the Daddy of the family worked Monday to Friday and went sailing at the weekend.  Of course times have now changed with both partners working in a lot of cases and families like to enjoy their weekends together and this may not always lead to sailing each weekend. The members agreed with another comment that it now appears there are new Leagues being announced for every night of the week and also Sundays. Some leagues might have three participants and a write up is posted to this effect in glowing terms and hoping for another one or two participants for the following week. This certainly is no help to promoting the notion of a thriving activity. There was also a comment that for every new member a club obtains another one leaves.

Caroline Forde Rear Commodore Membership for Kinsale YC gave a delightful description of an all in race they hold which includes Squibs Dragons, Cruisers etc and this provides real fun for all participating.

Finally there was a suggestion made that perhaps Sports Boats could join the South Coast Offshore Racing Association. However the Commodore did point out that SCORA is for cruising boats equipped for same but indicated he would look into it.

Having thanked KInsale Yacht Club for the facilities and hospitality received, the meeting finally concluded with presentation of prizes and delicious finger food.