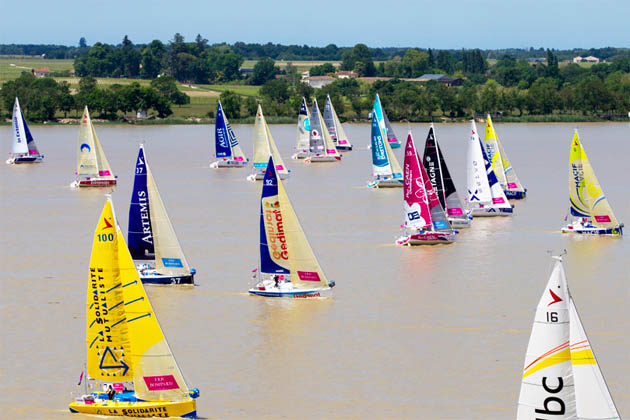 From on board the French Navy’s ship Le Flamant at precisely 1300hrs local time Bordeaux mayor Alain Juppé fired the starting signal of the 44th Solitaire du Figaro-Eric Bompard cachemire, setting off the inaugural leg, from Paulliac to Porto.

What a thrill of a lifetime it must have been for young David Kenefick as he sailed in this world renowned hugely competitive fleet. Under blue skies thousands of people packed the river banks and dozens of spectators boats saluted the 41 skippers leaving for the first stage of one month and 1,938 miles of racing. Paul Meilhat (Skipper Macif 2011) was in the early lead, but the course to Portugal is still long and will be full of hurdles??The competitors in the 44th Solitaire du Figaro-Eric Bompard cachemire left the pretty village of Paulliac today, heading for Porto, on the northern Portuguese coast. Before making to the river estuary and getting into the open ocean they delighted the local crowds and supporters, gathered to wave them goodbye, racing on a coastal course of around 10 miles. ??In ideal wind conditions, a 10 to 12 knots breeze from the north, double past winner Jérémie Beyou (Maitre Coq) made the best start at the Committee end of the line, but shortly after the signal the fleet split in two groups, one sailing off the northern bank and the other, led by Frédéric Duthil (Sepalumic), picking up to the south side. ??Both groups had to fight against the river’s idiosyncrasies and a strong current forcing all skippers to tack several times. First to go around the upwind mark was Frédéric Duthil (Sepalumic), chased down by Jean-Pierre Nicol (Bernard Controls) and a very determined Nick Cherry (Magma Structures) while the rest of the fleet followed in quick succession. ??Once the spinnakers were hoisted, the Figaros pressed on to the next downwind mark where Jean-Pierre Nicol (Bernard Controls) rounded in first, followed by Paul Meilhat (Skipper Macif 2011) whilst Jérémie Beyou (Maître Coq) and Frédéric Duthil (Sepalumic) went for the other mark.?The last passage of the fleet in front of Paulliac produced enthusiastic rounds of applause by the public assembled on the harbour breakwater, with Jérémie Beyou (Maître Coq), Gildas Morvan (Cercle Vert) and Frédéric Duthil (Sepalumic) putting on a show passing just metres off it. bounced back from mid-fleet to the 5th place. The three times Solitaire du Figaro winner was followed by Frédéric Duthil, Adrien Hardy, Thierry Chabagny (Gedimat), Vincent Biarnes (Prati’Bûches) and the first non-French skipper, the Briton Nick Cherry in 10th place. ??First among the rookies was Simon Troël (Les Recycleurs Bretons) in 13th while the other Anglo-Saxon skippers were Henry Bomby (Rockfish) in 16th, Edmund Hill (Artemis 37) in 20th, Jackson Bouttell (Artemis 77) in 22nd, Sam Goodchid (Sjelterbox – Disaster Relief) in 34th position respectively. David Kenefick (Full Irish), the youngest sailor in this year’s Solitaire, was in 36th place.

The 41 skippers still had some twenty miles to cover before getting to the pointe de Grave and turning SW to head to the Radio France mark, set close to the Cordouan lighthouse that the leaders were expected to reach around 18:30, that is to say more than one hour before the reverse of the current with a nice northerly breeze of a dozen knots.

The fleet’s progress and the latest news can be followed at the race tracker page on the official website: www.lasolitaire.com