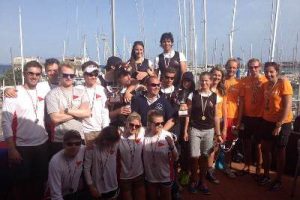 Three days of brilliant sunshine and great breeze set the backdrop for the most dramatic of 2K events. Teams from Italy, The Netherlands, Germany and Ireland gathered for what the international jury described as the closest racing the series has seen all year.

Day 1 saw the Cork Racing Team in blistering form, winning 6 of their 7 round robin races, and losing only to the Rome Racing Team.

DAY 2 was comprised of 8 hours on the water, 6 races, 5 wins. This left us 2nd overall in the Gold Fleet standings.

Day 3 started with a light breeze which quickly filled to a steady force 3, flat water, and 25 degrees under a cloudless sky.

In semi final 1, The Royal Cork Yacht Club met the seasoned Dutch Team, fresh from a winter of team and match racing.

Race 1, and a pre start error by the Dutch gives the lead to the Irish… Undeterred, the Dutch got back into the action only to watch the Irish team with great boat speed, take an easy 1-2. Declining to change boats, the Dutch quickly turned the tables in race 2 leaving the score 1-1. Race 3 goes to the Irish and their first slot in a 2K finals.

The all Italian semi final proved to be the shoot out all had expected with protest flags flying even before the prep. With positions changing on every leg, the young Roman team of Saverio Ramirez and Edoardo Scotti Mancinelli finally took the 3rd and final race to win 2-1, and the Italian Championships.
With time running out the Irish now entered the fray against the exuberant Romans. A poor start by Italy set the scene for an easy win….and so it was till the last 50 meters. With Scotti spinning, all was down to Ramirez, who started what was the most exciting of dog fights, some six penalty turns later and the Italians gained the inside at the pin, and locked the Irish out to win 2-3. The time limit of 4PM cancelled the chance of a best of three final, and so, the Italians took the title this time.