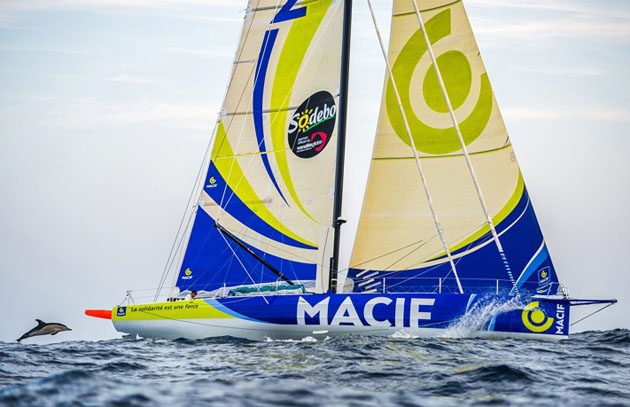 Francois Gabart in ‘Macif’ current leader in the Vendee Globe. This superb picture by Julien Girardot is entered in the competition for The World’s best yacht racing photograph 2012.

After the high emotions of start day in Les Sables d’Olonne skippers competing in the Vendée Globe solo round the world race had an active, challenging first night at sea dealing with unstable winds, occasional squalls and regular manoeuvres. On the early morning ranking François Gabart leads the fleet that already spans 74 miles on the Bay of Biscay.

Marc Guillemot, who finished third in the last edition of the race, limped back into Les Sables d’Olonne at 0300hrs (local) this morning to have his IMOCA Open 60 Safran assessed after suffering unspecified damage less than five hours into the race. It was confirmed this morning that Safran will not restart the race.

The returning Guillemot crossed courses with Bertrand de Broc who started out from Les Sables d’Olonne at 0245hrs after making a rapid repair to the hull damage he sustained 25 minutes before the start on Votre Nom Autour du Monde avec EDM Projets.

With some 165 miles to make to Cape Finisterre, the NW corner of Spain, François Gabart, one of the fleet’s youngest and most talented skippers, has taken charge of the fleet on Macif with a lead of some 5.2 miles early this morning ahead of 2004-5 race winner Vincent Riou (PRB) and Armel Le Cléac’h (Banque Populaire). All three, training partners from the famous Pole Finistere training group were among the five transgressors who crossed the start line prematurely on Saturday afternoon and had to immediately turn back to restart.

Finding the sustainable racing rhythm for a circumnavigation course which is expected to take more than 80 days has not been easy for the skippers. The NW’ly winds, though mainly steady in direction have been very changeable in strength requiring constant trimming and adjustment. “It is banging a bit, it is wet, it is cold. Fortunately there are many manouevres and so that warms us a bit.” Reported Groupe Bel’s skipper Kito de Pavant early this morning.

The leading trio, PRB some three miles ahead of Banque Populaire, had already built a decent cushion to Bernard Stamm on Cheminée Poujoulat who was 15.6 miles behind the pacemaker this morning. Of the other non French skippers Alex Thomson was lying seventh on Hugo Boss at 17 miles behind Macif and Mike Golding on Gamesa is tenth. The course to Cape Finisterre remains a straight one and it will only be after the corner that there will be strategic choices which might open up the fleet more. It was confirmed this morning that Marc Guillemot has had to retire from the race after suffering damage to the keel of Safran during the first evening of the race. At 1745 hrs CET (1645 hrs GMT) on Saturday 10th November, Marc Guillemot called his shore team to inform them that he had hit something and that there had been a loud noise, after which the boat suddenly heeled over. After making the boat safe, the skipper of Safran decided to head back to Les Sables d’Olonne in order to inspect the damage.Marc Guillemot arrived in the port of Les Sables this morning (Sunday) at 0300hrs local time. His shore team immediately examined the boat and saw that the keel had broken off under the waterline. As they do not have a spare keel, Safran is unable to set off again in the race.