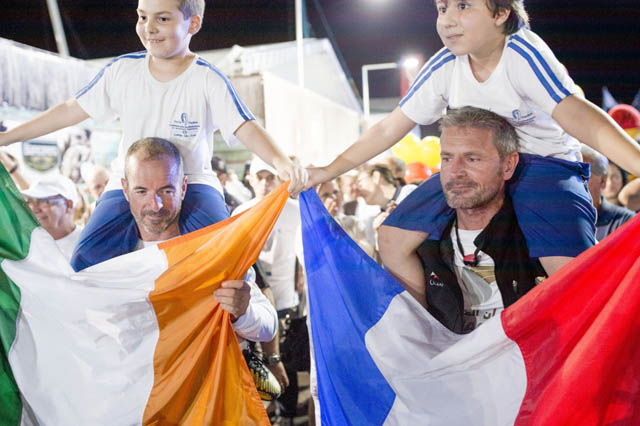 “Of course when you are a competitor you want to win, but in the meantime I think we raced well and it wasn’t to be this time. Sebastien and Charles on Edmond de Rothschild did a superb job and although we almost caught them they managed to stay just out of our reach to win the race,” said skipper Sidney Gavignet on arriving at the dock in Itajaii to a crowd of well wishers. “We didn’t win but we did well and we are incredibly lucky to be pilots of these machines!”

The Sultanate of Oman’s flagship MOD70 campaign left Le Havre on 7 November at 1300 local time for the longest and toughest challenge ever undertaken on these one design trimarans usually sailed with a crew of six, and although their rival took the lead off the coast of Brittany, the Franco-Irish duo kept the pressure on averaging 21.77 knots of boat speed throughout and closing the gap to 21nms at one point, before suffering hydraulic issues and falling back again.

Sidney Gavignet, long time skipper of the MOD70 Oman Air-Musandam more commonly used to train elite Omani sailors at international events in key tourism markets for the Sultanate and its national airline Oman Air, completed his second Transat Jacques Vabre today and crossed the Equator for the 12th time in his career! “Sailing the boat with two is great, although that doesn’t mean to say that I don’t like sailing the boat with six! I was saying to Damian as we came in now that going back to sailing fully crewed after this adventure will be really strange!

“In fact we got used to it much quicker than we thought. For all four of us – Damian, myself, Sebastien and Charles – we are all much more confident with the boat now and if ever there is a single-handed event with these boats in the future, this will have been a very valuable experience,” he said.

The pair arrived to a heroes welcome in Itajaii: “It’s fantastic to arrive in Itajaii at last – there were people on the pier outside the harbour, even at night and for the second placed boat, that was fantastic to see. The Brazilian atmosphere is fantastic, and this place as a venue is a dream. Let’s talk about how we celebrated the finish in the morning! I like Samba and we are in Brasil so…!” he said laughing.

His Irish co-skipper, Damian, who during his last Transat Jacques Vabre in 2005 was airlifted to safety, was delighted to have completed the race, making it his third. He has crossed the Equator a whopping 24 times during his career! “Gitana really deserve the win, they made less mistakes than we did and I think the most important thing when you finish an event like this is to have no regrets, we would change very few small things that we could have done a bit better, but we crossed the finish line very happy with the 12 days at sea.

“The toughest moment was going around Finisterre, where we went into defensive mode thinking of the long term whereas in reality we needed to push and stay with the strategic game heading in the right direction and getting south fast because the further south you got and the sooner you got there the better the conditions became for the following week. We dropped off the back a bit at this stage.

“And the other difficult moment was when we had fought our way back up to the other guys – I think we were within 20miles of them – and we lost the hydraulics on the rig (about 36 hours ago).

“There was a balance of very difficult and lighter moments, by the 3rd or 4th day we were starting to recover and realised how much we had put in. One of our main objectives was to get here in good shape and I think we have managed to achieve that – we said that If we got here in good shape then that meant that we had managed the machine correctly within the limits of what we should be doing.”

Oman Air-Musandam, Damian and Sidney will recover for a few days while the rest of the 45-boat fleet finishes, before the final round of the Transat Jacques Vabre on the 30 November when all classes are scheduled to sail a postlogue in port race in Itajaii before returning to their respective home ports.

David Graham, CEO of Oman Sail said it had been a momentous race. “They didn’t win this time but Sidney and Damian have still written Oman into the history books of long distance offshore racing. It was a tough and challenging event and everyone here in Oman was watching their every move in what became a fiercely fought battle. Their determination has inspired thousands of young Omanis and brought fame for the Sultanate. We congratulate you!”

Wayne Pearce, CEO of Oman Air added his congratulations to the team, saying that Gavignet and Foxall had pushed Oman Air-Musandam and themselves to the limit. They might not have won the race but they had won the hearts and admiration of everyone in Oman. His message to them: “Your relentless hard work over the past two weeks, and the way in which you pushed the limits all the way to the finish, deserve the highest praise. Oman Air is proud to have supported your outstanding efforts and, whilst first place was not to be yours this time, you were able to help us win new international audiences and bring Oman’s unique beauty, rich culture and warm hospitality, as well as the Oman Air brand, to discerning travellers around the world. We thank you and congratulate you.”