steady breeze and great racing provided the perfect recipe for the opening day of competitive action at the 2014 ISAF Youth Sailing World Championship in Tavira, Portugal.

After a slightly calm morning the breeze kicked in mid-afternoon allowing a full complement of races across the eight events.

The 367 sailors from 67 nations were spoilt by the Portuguese conditions with a breeze that varied between 12-15 knots coming in consistently from a south westerly direction.

Laser Radial Boys racer Seafra Guilfoyle (IRL) was all smiles post racing and had reason to be, he holds the lead in the 57-boat fleet.

Like Hughes in the girls division, Guilfoyle revelled in the breeze and took the first bullet. A fifth place followed and he leads on six points, tied with Denmark’s Patrick Dopping.

After racing Guilfoyle said, “It’s been really good. Everyone is a brilliant sailor and it’s not been easy and you always have to claw for every point. I can’t complain about a one and a five from today. The wind was really nice and picked up which is what I like. The conditions are a lot less complicated than a lot of other places. Once you know which way the current is going it’s easy enough because there’s not many wind shifts that pay off.”

In the 29er Class Sean Donnelly and Patrick Crosbie have had three races and are lying 20th in the 30 boat fleet.

The camaraderie at an ISAF Youth Worlds is unique and Guilfoyle is making the most of his surroundings, “I’ve made a lot of friends already and I know they’ll be friends for life. It’s been a great event so far and I’m hopeful for more this week and hopefully we’ll have a few more days with wind like this.” 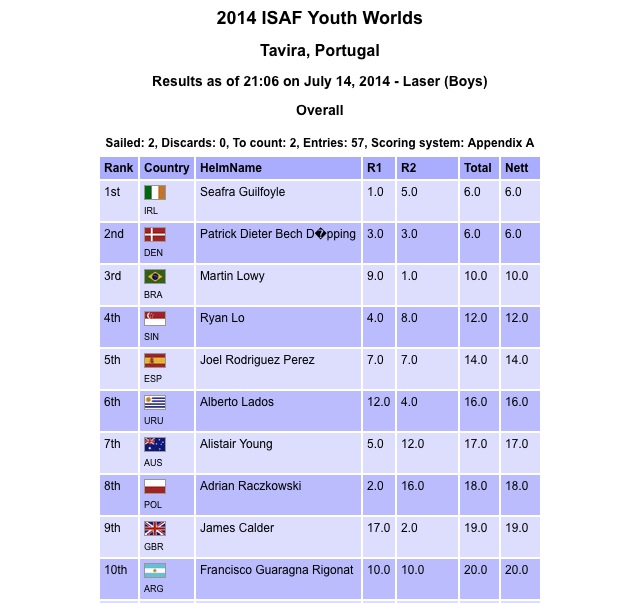