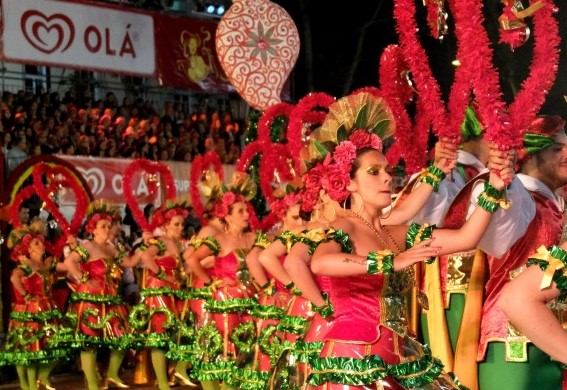 The annual parade celebrating the feast of St. Anthony one of the cultural highlights of the Lisbon stopover

Excitement builds as the arrival of the Giant Multihulls at Dun Laoghaire draws ever closer. The Multi50 fleet have had the start of their Leg 2 offshore leg from Lisbon to Dun Laogahire, Dublin Bay advanced because of the anticipated arrival of a bad low pressure system.

The system is due over Cape Finisterre on Monday morning and so the Multi50’s will set off tomorrow Saturday at 1500hrs after making a short, eight miles circuit in the river, joined by the MOD70s and the Ultime Prince de Bretagne, before the four Arkema – Aquitaine, Actual, FenêtréA-Cardinal and Rennes – Saint-Malo Agglomeration head out to the sea.  The MOD70’s will then race their three inshore races from 1600hrs.

The stopover in Dun Laoghaire is scheduled from July 20 to 24 and a magnificent festival is planned.  It is fair to say to anyone who has not enjoyed one of these festivals on the East Pier and the Peoples Park that it would be very hard indeed to beat the magic that is created here and particularly for this visit . The crowds, the atmosphere, the food, the crafts, the entertainment and the experience of the culture of Ireland I could go on but of course all this depends on the weather and one can only keep fingers crossed that it will be favourable for the duration of the visit.  One of the purposes of these special stopovers during the race is to highlight all these features of the different countries.

The next stopover at Plymouth is scheduled for July 26 to 29 and both these visits are expected do draw over 200,000 people at each visit.  The final stop and finish of the race will be the finish at the Bay of Morlaix on July 30th where it is anticipated a crowd of 300,000 people will turn out to welcome the Princes of Bretagne back to Brittany.