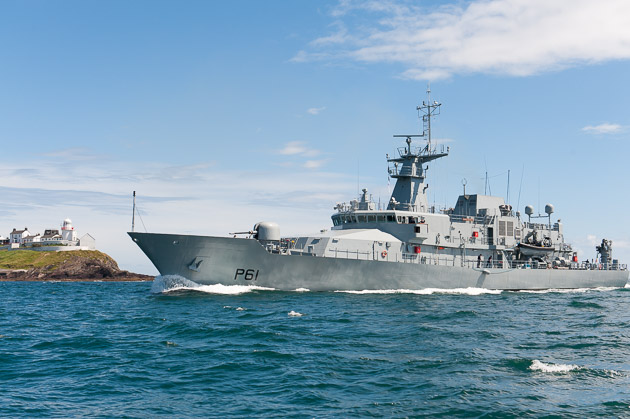 Your scribe was stopped in her tracks at breakfast this am listening to RTE Morning Ireland. Presenter Keelin Shanley was on air and about to conduct an interview with Lieut.Commander Tony Geraghty of the Naval Service as he and his crew were making full speed to arrive at their base in Haulbowline at 11am. What a cheerful and heartwarming interview it was. They had left the area where they saved 1000 migrants from drowning as they fled their countries and had been involved in and witnessed untold misery and tragedy and now it is time for our brave naval service men and women to be welcomed back to base just in time to celebrate what will surely be a wonderful Christmas for them.

Lieut. Commander Geraghty was asked what the atmosphere was like on board and gave a great human description of what it all felt like for the entire ship’s crew but what really struck me and just completed the whole picture was his description of the Christmas music playing out all over the ship and in particular Chris Rea’s ‘Driving Home for Christmas’ that was playing at the time. He described the smiles on the faces of the crew as spreading from ear to ear. I could just visualize the scene and found it all very moving. Coming home from misery and now being free to enjoy the welcome from all their loved ones, spouses, partners, little children, Grandparents, perhaps even in some cases the family mutt just rang a very special bell.

Congratulations to one and all and not forgetting our own club’s esteemed member and Minister for Agriculture, Food, Marine and Defence Simon Coveney, who played such a major role in this whole operation and who always gave such a calm and measured reasoning when speaking about the awful situation and the involvement of our own defence forces who made such a magnificent contribution to this whole dreadful situation.

We are not forgetting the previous Irish Naval vessels and their crews who each in their turn broke new ground for the those following after and we are truly indebted to them all and very proud to have such a fine service representing our country.

The Royal Cork Yacht enjoys very cordial and strong relations with the Irish Naval Service and only this summer just past rededicated the plaque commerating the founding of our club on Haulbowline on a wonderful occasion hosted by the Naval Service with great hospitality and a great sense of pride.