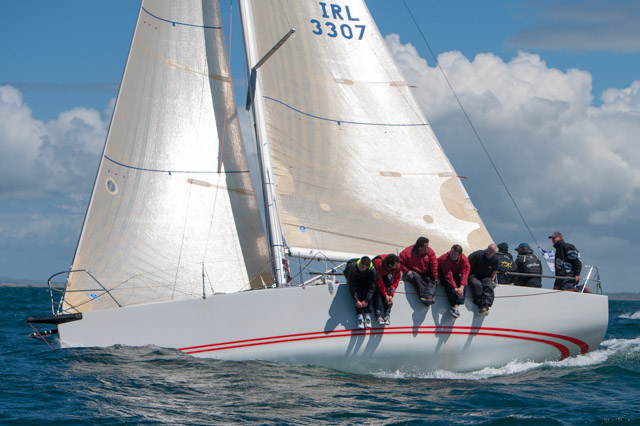 For the second day of racing at Cork Dry Gin Calves Week weather conditions were very light with an East/South East breeze.  Race Officer Neil Prendeville decided to keep the fleet close to the Calf Islands only this time he sent them in the opposite direction to yesterday.  The bigger boats sailed two rounds of the course while the others sailed a single round and in addition the courses were shortened.

In Class 2/3 IRC Derek Dillon in his Dehler Big Deal took line honours and this was enough to give him the win from his brother Ernie Dillon also in his Dehler, Silk Breeze. David Buckley in Boojum placed third.

In Class 01/IRC Kieran Twomey continued his winning ways in Gloves Off followed by Conor and Denise Phelan in Jump Juice with Paul O’Higgins Rockabill  V in third place. In Class 0/1 ECHO the students from Schull Community College sailing Infinity  showed they could mix it with the best in coming second to Gloves Off and with Declan Hayes in Indecision finishing in third place.

In Class 2/3 some of the Class 3 boat skippers expressed frustration at being joined in with Class 2 as they felt the bigger boats had an unfair advantage by the combining of these two fleets.  This type of situation was last aired at the November AGM of SCORA held at the Royal Cork Yacht Club.

Racing continues tomorrow (Thurs) with the Fastnet race scheduled and fresher conditions expected. Depending on these conditions it may be necessary to send the smaller boats on an alternative course.

Kieran Twomey, Royal Cork, in Gloves off took up the running today from where he left off in Calves Week 2012
Cork Harbour Orienteering Race