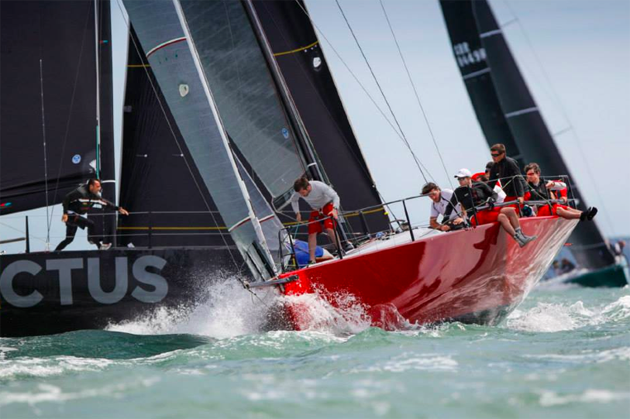 With the final three races today of what has been an eventful  and extremely competitive event, the all amateur crew of Antix finished in sixth position. Results here:

After the opening day’s wild west show, the serene Eastern and Central Solent was chosen as the combat zone for the second day of the RORC IRC National Championship. Blessed with sparkling conditions and a gentle southerly breeze, racing got away on schedule in a light southwesterly breeze. However, all that glitters isn’t gold and during the course of the day the light shifty breeze oscillated a full 50 degrees, which combined with a spring tide to provide a complex and ever changing conundrum for the competitors. Although one race start was abandoned, all three scheduled races were completed for all classes.

IRC One
Mike Bartholmew’s GP42, Tokoloshe II scored the lowest combined score in IRC One today, posting a 3-1-4 to make up ground on the class leader. Piet Vroon’s Ker 51, Tonnerre 4 won the first race of the day and placed second in Race 5, but the fickle breeze in the last race transpired against the Dutch yacht, which scored their discarded 11th for Race 6. Tonnerre 4 still lead the class by three points from Tokoloshe II, Sir Keith Mills at the helm of Ker 40+, Invictus is third.

Bastiaan De Voogd’s Sydney 43 GTS, Coin Coin had a great day on the water, scoring a third and a win to round the day off in style. Sir Keith Mills’ brand new Ker 40+, Invictus, struggled in the light, non-planing conditions, but Keith was still smiling when he reached the dock: “I am really happy with the boat and the crew work, but it will take a bit of time to get her up to full speed.”

“It was a very tricky day,” commented Tokoloshe II navigator, Pete Selby: “Generally today the side to take was dictated by the tide. For the first two starts the tide was on the turn so inshore was going the other way to the deeper water. The island side seemed to have more pressure but a lot of the choice today was tidal. Our starts were very good and that was very important with the whole pack going the same way. If you didn’t get away cleanly, you were in traffic all the way.”