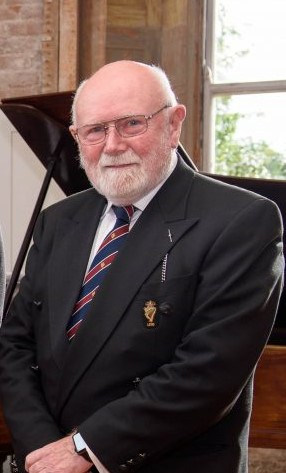 By Communications on February 20, 2022 in Latest

Former club Archivist Dermot Burns passed away peacefully on February 6th. Dermot served as club Archivist from 1991 to 2019, it’s said history was his passion and sailing his hobby.

Dermot’s enthusiasm for the club’s history was infectious and it was matched by a careful and meticulous approach to the cataloguing and care of any documents and items that came into the club. He delighted in discovering new aspects to the club’s history and left no stone unturned in trying to track down much needed information.

He brought his skills as an engineer to his study of the archives and soon realised that there was wonderful material contained within and potentially more information elsewhere, all of which would be vital in telling the history of the club. So, the idea of publishing a book about the club began to take shape and over the ten years leading up to 2005 he worked closely with Dr. Alicia St. Leger, the author of the book. Peter Crowley, Admiral in 2005/2005, also realised that as Cork was to be European Capital of Culture , it would be appropriate  to release a book on the history of the oldest yacht club in the world, and indeed gave his wholehearted support for the project. 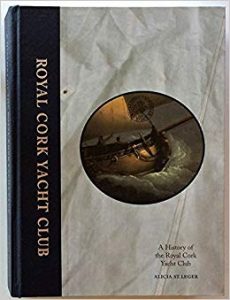 A History of the Royal Cork Yacht Club. The culmination of some 14 years research by the club archivist Dermot Burns and the author Dr. Alicia St. Leger

His own love of sailing and his knowledge of Cork Harbour was of huge assistance in compiling the history of the club.  In fact, that publication would not have happened without his enthusiasm, dedication and sheer hard work. But his input certainly did not stop there.  He continued to research the origins of the club and to interact with people (both within and outside the club) who shared his interest in the history of sailing. 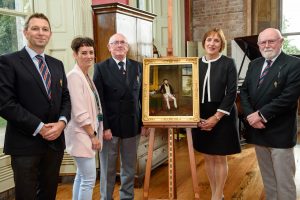 Dermot Burns, far right, at the celebration of the homecoming of the long-lost portrait of John Smith Barry at Fota House, Fota Island. The painting was jointly acquired by Fota House in collaboration with the Royal Cork Yacht Club (RCYC).

He has left a remarkable legacy in the club Archives which he built up so carefully over the years and which will be a vital resource for future researchers.  His role in the 2005 book and his ongoing contributions to publications, to interested individuals and groups, and to the media, have been immense and were rightfully acknowledged when he was made an Honorary Member of the Royal Cork Yacht Club.

Dermot will be greatly missed by all in the Royal Cork and our sympathies are with Fran and their wide circle of family and friends.